Leading researchers and former science ministers have today warned the UK government it risks ’throwing away’ years of investment and is staring ’decades of slow economic decline’ in the face unless the UK keeps pace with science funding levels in other countries.

The Royal Society has today released a major report calling for increased long-term investment in science and a focus on the human capital involved in scientific research.

"We don’t have many jewels in our crown - one of them is science" - Martin Evans, Nobel laureate

Amid the looming threat of cuts to research budgets, the Royal Society has called for heavy investment in the UK research base - ’one of the country’s few genuine areas of competitive advantage’ - to help drag the country back to economic stability and maintain its position at the forefront of global research.

With the US, France, Germany and China ploughing billions into R&D, the UK stands out as a major economy looking to cut science funding.

’In response to the economic downturn, countries like the US, France and Germany have all worked out that their road to recovery is paved with scientific knowledge and scientific skills,’ said Sir Martin Taylor, chair of the report’s advisory group. ’The UK has been in the top two of the scientific premier league for the last 350 years. It would seem obvious that politicians would recognise the need to invest in this competitive advantage rather than cutting funds.’

However, with cuts to science spending being portrayed by some ministers as inevitable as a consequence of the tight economic climate, the call for increased investment could well remain unsatisfied.

’Investment in science cannot be turned on and off on a political whim - we must have a long-term investment,’ insisted former science minister Lord Waldegrave. ’We’ve had 15 years of consistent policy, and we’re beginning to see results. Those results underpin all our hopes for economic growth in the future, and we shouldn’t throw it away now.’

Falling down the funding ranks could do more than just affect the quantity of research carried out in the UK according to Lord Sainsbury, former government science and innovation minister. ’[We’re now in] a position where we’ve gone from brain drain to brain gain,’ he explains. ’If we’re not careful and we start cutting [funding], we’ll see that reversing again and that would be hugely damaging.’ 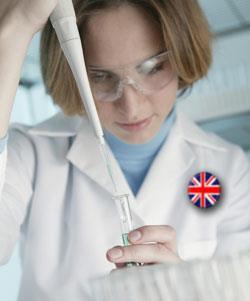 Focus on the people, rather than the projects

This concern echoes comments made by senior scientists at the recent American Association for the Advancement of Science annual meeting, who warned that those making cuts to science funding would be ’hoping for the best’ and risking driving home grown talent abroad.

Providing high-flyers in the UK research community the environment and resources to flourish and focusing on people, rather than projects, were key recommendations of the Royal Society report.

’A PhD in science guarantees you a fast path into almost everything,’ Sir Richard Friend, member of the report’s advisory panel and Cavendish professor of physics at the University of Cambridge, UK, told Chemistry World. ’The evidence on the ground is that if you get your quality qualification in science, the job opportunities have never been better.’

’We’re talking about creating a landscape within which individuals can find new approaches to allow curiosity to find its way into great science.’

The physical sciences were singled out as being in particular need of increased investigator-focused funding schemes, with few options for such awards currently open to researchers in these fields.

’We want to give the chance to really top individuals to fly,’ Nobel laureate Sir Martin Evans, advisory group member and University of Cardiff president, told Chemistry World.  Fellowships, Evans says, would be a good way to direct limited funds because they would ’help to maintain the future - and that’s what we’re talking about’.

’We don’t have many jewels in our crown - one of them is science, and science is an activity that does have benefits, both direct economic benefits but also major societal benefits,’ he said.

Science ministers for the three main political parties have in recent months been grilled on their plans for the future of British research in what many are hoping will become a more central issue in the run up to the general election.

’If we make the right policy choices now, then the UK we believe can secure its prosperity for the next generation and beyond,’ says Taylor.