A catalytic system to turn carbon monoxide into fine-chemicals feedstocks could be developed within months.

A catalytic system to turn carbon monoxide into fine-chemicals feedstocks could be developed within months, say UK researchers. The system would alleviate pressure on dwindling crude oil supplies, they predict.

Geoff Cloke at the University of Sussex and colleagues recently discovered that a triangular trimer of CO molecules, C3O32-, could be made with the help of a uranium complex. The trimer can be used to make functionalised five-membered rings, which have countless uses in fine chemicals and natural products synthesis, including prostaglandin synthesis,  Cloke told Chemistry World. The uranium system will allow very cheap feedstocks to be turned into useful chemicals, claimed Cloke. 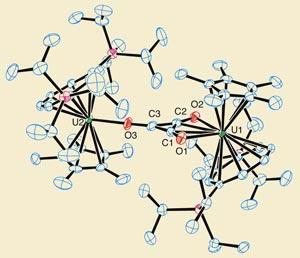 Five-membered rings are usually made from other ring systems using conventional organic synthesis. Cloke’s metal-based discovery has opened up a neglected area of research, ’Nobody found the right system so they stopped doing it,’ he said. He is keen to stress that only depleted uranium is used, ’radioactivity has nothing to do with it.’

Andrea Sella at University College London said Cloke’s data were ’astonishing’. Such blue skies research has become rather unfashionable, said Sella. Reactivity like this wouldn’t be predicted from conventional chemistry models and most researchers wouldn’t even attempt it, he added.

Cloke’s work could have a substantial impact on organic chemistry, ’and it’s happened by accident,’ Sella told Chemistry World. He is impressed that Cloke’s system uses CO to make much more complex molecules, and is carried out under mild conditions.

Three membered rings are much sought after, Sella said. ’If it’s possible to open this up and make different ring sizes, then you start having a very versatile tool.’

The reaction to form the C3O32- molecule was stoichiometric - one uranium complex for one trimer. Cloke now wants to make the system catalytic. He hopes to reach this point in the next three months, and then begin further developments to make a commercially viable product.

This might be someway off, Sella suggested. The uranium starting material is not easy to make or handle - but its reactive nature is the reason why it has reacted like this with CO, he said.

Cloke plans to hold talks with British Nuclear Fuels to discuss developing his system. He has an Engineering and physical sciences research council (EPSRC) grant under consideration, and is hopeful that his preliminary study will make it easier to attract more funding, possibly bringing in enough money to patent any successful catalyst.