Chinese researchers have developed an aptamer cross-linked hydrogel that changes from bright red or blue to colourless when exposed to tiny amounts of cocaine. No sophisticated analysis is required, and it is hoped the gel will provide quick visual tests for small molecules such as drugs, explosives or water contaminants.

The gel is made from polymer chains that are weakly held together by aptamers: short peptide chains that are engineered to bind to specific molecules. In this case, the researchers, led by Weihong Tan at Hunan University and Chaoyong Yang at Xiamen University, used an aptamer that binds strongly to cocaine.

When the gel is exposed to small amounts of the drug, the aptamers release their hold on the polymer chains and instead bind to the cocaine. This causes the structure of the gel to collapse.

In order to trigger a visible colour change when the gel collapses, the researchers trapped gold nanoparticles inside the structure. As these escape, the gel turns clear.

To improve the process, the team instead trapped amylase enzymes in the gel structure. They then dyed the gel dark blue with amylose and iodine. As the gel begins to collapse, the enzymes are released and catalytically break down the amylose - turning the gel colourless. 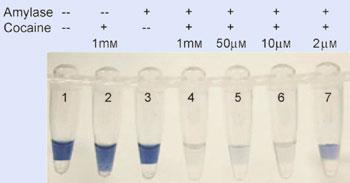 According to the researchers, as little as 20 nanograms of cocaine can be visually detected using this method in under ten minutes - which compares favourably with other systems that need complicated instrumentation for analysis.

However, the real potential lies in integrating different aptamers into the gels to enable them to sense different compounds. ’This system could be adapted to a huge range of small-molecule species, as long as suitable aptamers can be prepared for them,’ says Colin McCoy at  Queen’s University, Belfast, UK.

The low cost and simplicity of the method holds great promise for many applications - from airport security to rapid diagnostic systems in disaster areas. Also, Tan’s team propose that the gel could be micro-patterned onto small "lab-on-a-chip" devices, which would be useful in forensic analysis or environmental monitoring.

’It should be relatively easy to take forward to a quantitative, rather than qualitative, device - which would be a real breakthrough,’ says McCoy. Jason Burdick at the University of Pennsylvania, US, agrees that there is a lot deal of potential. ’This technology could be used for a whole range of detection applications, as long as the researchers ensure that the sensitivity is good enough,’ he says.