Gels made with genes incorporated into the structure could soon make protein production cheaper and easier, according to researchers in the US. The new gels contain no living cells and have the potential to produce large quantities of valuable proteins for applications from novel biomaterials to drug discovery and delivery.1

’Our protein producing gel is termed a ’P-gel’ and marks the first time that gels have been used to make proteins without any living cells,’ says says Dan Luo, who led the research at  Cornell University in the US. The new gels are around 300 times more efficient at making proteins than conventional ’cell-free’ systems that use the raw genes in solution, Luo adds.

The inspiration for the gels came in 2006, when Luo’s group developed polymer-like hydrogels made from fragments of DNA shaped into crosses, Y-shapes and T-shapes.2 Now, Luo’s team have adjusted the manufacturing process of these semi-liquid gels. Instead of using blank DNA, they chose to use real genes as the monomers and cross-linked them together using synthetic cross-shaped DNA. 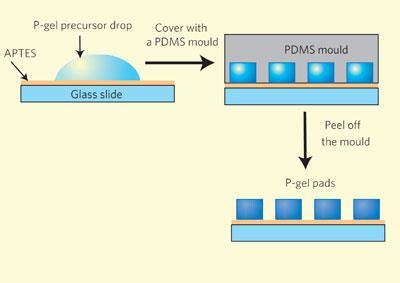 By choosing which genes are used to make the gel, it can be turned into a miniature protein-producing factory - capable of producing large quantities of valuable proteins. The turnover of the gel is quite high, with each gene able to produce around 250 times its weight in protein over 24 hours.

The system has been tested on 16 different proteins so far, successfully making them all. To demonstrate the P-gel’s potential, the team also made a few proteins that are usually difficult to make through processes that use living cells - such as a toxic protein and a sticky ’glue protein’ found in mollusc muscles.

’We are currently making proteins on a scale of around 10 mg, but it is not difficult to arrive at 1 gram scale,’ Luo told Chemistry World, but to get up to larger industrial scales, the process will need some further development.

Luo also hints that other more developments may be coming soon - with the intention of using P-gels to develop interesting systems for cell engineering or nanoparticle delivery.

’This is a good demonstration for the importance of multidisciplinary research,’ says Xiaosong Wang, a polymer expert at the University of Leeds, UK. ’The authors have made a significant advance in protein synthesis, but it will also provide inspiration for biologists, chemists and materials scientists.’