Scientists have directly read the genetic code from a single strand of RNA for the first time, using a combination of powerful microscopes and laser spectroscopy techniques.

If this method can be extended, sequencing traces of DNA could become as simple as ’reading a barcode at the supermarket’, according to Volker Deckert of the Institute for Analytical Sciences in Dortmund, Germany, who developed the technique with colleague Elena Bailo.

RNA, along with its cousin DNA, contains the genetic instructions required for organisms to function. This information is stored in a coded sequence of repeating chemical groups called bases, strung along the length of the molecule. Although our cells can understand this code, sophisticated chemical processing in the laboratory is needed to identify which sequences are present. Being able to look directly at the structure would require smaller amounts of genetic material and boost accuracy.

Deckert used a technique called tip-enhanced Raman spectroscopy (TERS) to read the strand. This unites a laser with an atomic force microscope (AFM) that carries a tiny, silvered glass tip. The tip moves across the RNA strand like the needle of a record player, and guides the laser to deliver a pulse that makes the strand vibrate. Light scattered from the molecule carries a tell-tale signature unique to each different base, which can be measured by Raman spectroscopy. 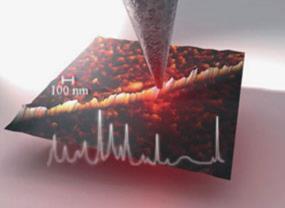 The scientists have previously shown that TERS can easily distinguish between nanoscale crystals of the different bases in RNA. But biological molecules are much trickier to pin down - so, as a proof of principle, Deckert’s experiment looked at a strand of RNA containing only cytosine, and showed that the tip could be perfectly targeted to pick out the base’s fingerprint within seconds.

The key to the experiment was the specially-made AFM tip, said Deckert. Since a strand of RNA is only about 2 nanometres in diameter, the 20-nanometre-wide tip must be capable of moving along the strand with incredible precision, yet robust enough to provide strong magnification.

Although the tip is not small enough to pick out the Raman spectrum of an individual base, it can be moved along the strand one base at a time. So while the spectrum contains overlapping signals from several bases, comparing the difference between neighbouring scans should allow the team to identify the sequence base by base.

Richard Mathies of the University of California, Berkeley, US, who uses laser spectroscopy to study biological molecules, is excited by the research. ’I think this is a very significant advance, but there are still challenges ahead,’ he told Chemistry World. ’The biggest challenge will be to ensure that individual bases can be correctly identified in more complex chains. Nevertheless, this is a big step forwards.’