Getting petrol back from carbon dioxide

A new reactor could make chemically recycling carbon dioxide back into petrol a worthwhile endeavour, US scientists say.

Researchers at Sandia National Laboratories, New Mexico, are to test a prototype device this spring, which will use concentrated solar energy to drive chemical reactions that split carbon dioxide molecules to get carbon monoxide. The same system was originally designed to split water to form hydrogen; and these two products can then be combined to synthesise liquid hydrocarbon fuels - such as methanol or petrol.

Splitting the stable carbon dioxide molecule is so tough that many researchers think the most economic course of action is simply to bury the greenhouse gas underground. And solar plants usually generate electricity, rather than split CO2.

But the Sandia team led by Jim Miller, Nathan Siegel and Richard Diver, who work on the ’Sunshine to Petrol’ (S2P) project, think their device’s chemical reactions are efficient enough to make it a worthwhile way of producing liquid fuels from  CO2 . Ellen Stechel, manager of Sandia’s fuel and energy transitions department, explained to Chemistry World that the ultimate aim is to have a series of solar-powered reactors, each collecting around 22kg of carbon dioxide and 18kg of water daily, and churning out some 2.5 gallons of petrol, based on target conversion efficiencies. ’Liquid fuels can be stored in trucks or piped using existing infrastructure,’ Stechel pointed out. 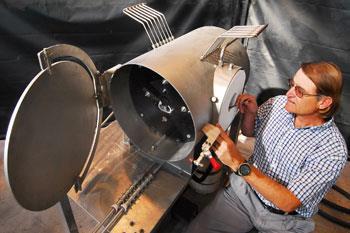 Lord of the rings?

A complete demonstration system is three to five years away, said Stechel, and to prove its commercial value will take much longer. But one key sticking point - CO2 splitting - is what the S2P researchers hope to crack.

The Sandia reactor consists of rotating rings, made of a cobalt-doped ferrite (Fe3O4) ceramic. Concentrated sunlight is directed onto a ring, heating it up to around 1500?C and driving off oxygen gas. The reduced material (FeO) rotates into a second chamber containing carbon dioxide, from which it takes back oxygen at a lower temperature, leaving carbon monoxide behind. It then cycles back into the sunlight again, so that the CO2 splitting should be a continuous process.

This simple chemical cycle also splits water into hydrogen and oxygen. But it is only plausible on a larger scale because of an engineering trick which conserves the heat entering the system. The reactor holds a series of stacked rings rotating in opposite directions; so that a heated ring moving out of the sun will heat up cooler rings about to face the sun. This arrangement limits the total energy input required.

So far, Stechel said, the researchers have shown this works for a batch process, but need to speed up their reactions to allow the more efficient series of continuous cycles. The final system, christened the Counter Rotating Ring Receiver Reactor Recuperator (CR5), should be about four times larger than the beer-keg sized prototype.

The Sandia team reckon their system is one of the most promising approaches to splitting CO2 for fuel. They have a few competitors, such as the company Los Alamos Renewable Energy (LARE), who claim to use solar power to directly split CO2 at very high temperatures; chemists who are taking catalytic approaches to split CO2 with hydrogen; or the alternative of electrolytic splitting. But if splitting CO2 is worthwhile at all, ’it’s hard to imagine anything that will show better thermodynamics or kinetics,’ said Stechel.