Getting to grips with volcanic ash

As the disruption to air travel caused by the eruption of the Grimsv?tn volcano in Iceland subsides, researchers are taking a close look at volcanic ash to try to understand how hazardous it is to both aircraft engines and human health.

When Grimsv?tn exploded on 21 May sending a column of ash and steam 20km into the sky, a sense of d?j? vu was palpable. Last April another Icelandic volcano, Eyjafjallaj?kull, stirred into life causing widespread flight cancellations, costing the airline industry billions. 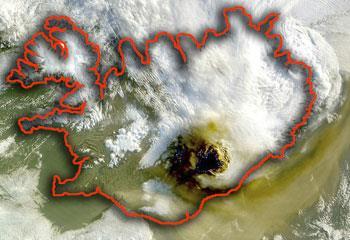 The two eruptions both produced fine particles of ash, but were geologically dissimilar. The ferocity and pattern of an eruption is influenced by a variety of factors. An eruption occurs when molten rock from the Earth’s mantle - magma - finds its way through the crust to the surface. In Iceland the magma is largely basaltic, consisting of silica (SiO2) and metal oxides. Volatile compounds such as water, sulphur dioxide and carbon dioxide are also present in the magma, and can affect the eruption.

Sticky silica
Silica content is crucial because it largely dictates the viscosity of the magma - the more silica the ’stickier’ the magma. As the magma approaches the surface, dissolved volatiles become gaseous. If the magma is silica poor and relatively ’runny’, these gases escape easily. If the magma is silica rich and viscous, pockets of trapped gas expand and eventually explode, shattering the surrounding magma and producing fine ash particles.

This was the case with last year’s Eyjafjallaj?kull eruption. But the explosive activity of Grimsv?tn had an added ingredient, explains Dave McGarvie of The Open University in Scotland. ’Ice and water can be crucial to an eruption. Not only was the Grimsv?tn eruption of much greater intensity - with a discharge rate at least 10 to a 100 times greater than Eyjafjallaj?kull - but the eruption happened beneath a lid of ice 50-200 metres thick.’

As basaltic magma met the ice, steam was created providing new energy to shatter the erupting magma, producing yet more ash and debris. ’The two eruptions illustrate beautifully how fine-grained ash can be produced in two quite different ways,’ says McGarvie.

Sharp and to the point
Meanwhile, researchers have completed a study into the dust thrown up by last year’s Eyjafjallaj?kull. A team led by Sigurdur G?slason of the University of Iceland and Susan Stipp of the University of Copenhagen, Denmark, has assessed the potential of ash to harm aircrafts and human health. Early studies suggest that while ash from both sites was fine-grained, that from Grimsv?tn was slightly coarser than that from Eyjafjallaj?kull: 50-65 per cent of Grimsv?tn ash on the ground was less than 60?m in diameter, compared with 45-70 per cent of that from Eyjafjallaj?kull, but the figures for grains less than 10?m across were less than 10 per cent, and 15-22 per cent respectively.

The ash from Eyjafjallaj?kull is dominated by andesitic glass and crystals of plagioclase, pyroxene and olivine, G?slason says. The hardness of this ash is comparable to titanium and much harder than the exposed surfaces of an aircraft.

The team carried out a series of tests on ash collected immediately after the Eyjafjallaj?kull eruption. They found that some of the grains were composed of nanoparticle aggregates which were sharp and jagged - adding to their potential abrasiveness. ’The speed with which an airplane would interact with a plume of very fine-grained ash would ensure that even nanoparticles would have the necessary momentum to wear surfaces, especially particles that are sharp and hard,’ the researchers say.

Stipp says that the aviation authorities are ’absolutely right’ to remain cautious about allowing aircraft to fly through volcanic ash. ’The particles are extremely sharp, like fragments of a shattered beer bottle,’ she says. ’Aircraft engines are tested in dusty environments such as deserts, but there the particles are rounded and weathered. The main issue is to understand what density the engines can tolerate, and over the past year the industry is starting to get much better information.’