Stretching small molecules with stilbene could give new insights into reactivity

A simple way to stretch small molecules and measure the forces at play has been developed by researchers in the US. Instead of using complex microscopy techniques, the molecules are attached to stiff stilbene - a compound that can change shape under specific wavelengths of light. The process should provide an inexpensive way to uncover new reaction mechanisms and examine how molecules behave under strain.

’We have developed a system to stretch small molecules in a very controlled manner,’ says Roman Boulatov, who led the research at the University of Illinois, US. ’In contrast to other techniques that use microscopic-scale devices to measure forces, our probes are comparable in size to the molecules we want to study - giving us an advantage.’

Stiff stilbene consists of two groups of rings that join in the centre with a double bond. In the Z-isomer, stilbene adopts a U-shape, allowing small molecules to be attached across the gap to form a hoop. To apply the stretching force, stilbene is triggered to convert to the rod-like E-isomer - pulling the small molecule taut. 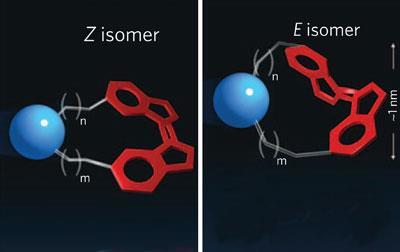 When the stilbene switches conformation, the molecule is stretched along its axis

Boulatov notes that it has previously been difficult to analyse the effects of strain on small molecules. Conventional techniques like atomic force microscopy have only been able to look at larger structures such as polymers or large biomolecules, making it difficult to predict how the molecules are affected.

Some of the team’s findings were surprising. ’Unlike a rubber band, which will always break faster when stretched, pulling on some chemical bonds doesn’t make them break any faster,’ says Boulatov. ’Sometimes it’s a bond that you don’t pull on that will break instead of the one you do pull.’

The team hope that this technique will provide chemists with the  empirical data needed to help design new systems, such as crack-resistant materials or stimuli-responsive polymers that respond effectively to forces. In addition, the study could give valuable insights into systems that are dependent on forces, such as motor proteins in muscle tissue.

Another opportunity for the probes is to investigate new reactivity, something that interests Stephen Craig at Duke University. ’I think that these molecular probes have tremendous potential for this,’ Craig told Chemistry World. ’Applying mechanical forces to molecules is potentially a phenomenal way to get all kinds of new reactivity to come about. These probes are a way to gain knowledge about reaction mechanisms that we can’t get by conventional means.’