Scientists in the US have described how to design surfaces that repel oils for the first time. The findings will make it easier to create oil-proof coatings and membranes for separating oil and water, the team says.1

Creating a surface that repels oil is much trickier than one that repels water. ’The main reason is that the surface tension of an oil is so much lower than for water,’ explains co-author Gareth McKinley of the Massachusetts Institute of Technology (MIT). This means oil tends to spread thinly over common hydrophobic surfaces, such as duck feathers. 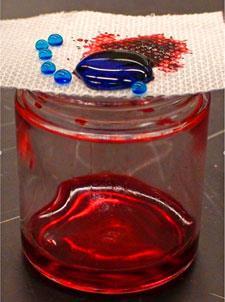 Source: © A Tuteja and W Choi

But a few examples of surfaces on which oils form almost spherical droplets have been reported before.2 These so-called superoleophobic materials generally have rough surfaces and prevent oil droplets spreading out because tiny cushions of air get trapped between the surface and the liquid. ’This allows the physics of an oleophobic surface to happen,’ said co-author Robert Cohen, also of MIT.

But surface roughness doesn’t always make for oleophobic properties, as McKinley explains: ’All kinds of rough surfaces are not created equal’.

To find out why some surfaces repelled oil so well, McKinley and his colleagues prepared precise model surfaces from silicon, covered in microscopic mushroom-shaped features known as ’hoodoos’. The caps of the hoodoos obscure some of the surface beneath them, and the team found that this was vital for trapping air pockets beneath alkane droplets.

The well-defined geometry of the hoodoos allowed them to come up with equations for the optimum superoleophobic surface for a given liquid. ’This is the first time a design framework has been applied [to oleophobic surfaces],’ said Cohen. Their framework can also predict the pressure at which the oil drop will force out the air pockets and spread over the surface.

Another successful surface was a mat of electrospun fibres made from a blend of PMMA with fluorine-rich compounds. Thinner fibres with smaller pores between them gave a more oleophobic surface. ’The design equations account for all of this,’ McKinley added.

Cohen and McKinley said the mats could be used as protective coatings for rubber gaskets, which can expand if they come into contact with oils.

Jas Pal Badyal of Durham University, UK, has developed superoleophobic coatings and other smart surfaces. He said the study helps to explain the underlying principles of the phenomenon. ’The good thing is it provides a really good rationale as to how superoleophobic surfaces work,’ he told Chemistry World.