Japanese researchers have developed microscale beads that visibly glow under the skin in response to blood glucose levels, signaling a potential end to repeated fingertip prick blood tests for diabetics needing to monitor their glucose levels.

To date, sensors embedded in the body to continuously track glucose levels have been of limited use because they need to be hooked up to external power sources and monitors, making them uncomfortable for patients. Fluorescent sensors have been suggested as a way to avoid the need for external connections, but they haven’t been successful as the signal hasn’t been strong enough to show through the skin and the materials used could be toxic.

To overcome these challenges, Shoji Takeuchi at the University of Tokyo and colleagues developed long-lasting, fluorescent, biocompatible beads that continuously monitor glucose without external power sources. The fluorescent glow was strong enough to be visible through the pale pink skin of a mouse’s ear. 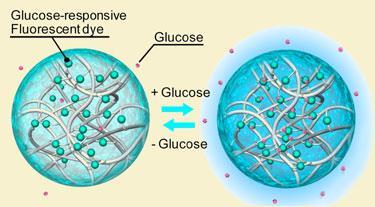 The researchers synthesized a fluorescent monomer made of glucose-recognition sites, a fluorogenic site, spacers, and polymerisation sites. The fluorescence increases as glucose concentration increases

The researchers created a novel molecule from diboronic acid and anthracene. The molecule selectively and reversibly bound to glucose and fluoresced without the assistance of any reagents and enzymes. The investigators added long, hydrophilic spacers and polymerisation sites to bind the molecule to flexible supports and increase the chances of binding to glucose molecules. The team then fabricated injectable fluorescent polyacrylamide hydrogel beads to pack the monomers into.

When the 130um diameter beads were injected into the ears of mice, the researchers tracked how the intensity of the fluorescence seen through the skin changed as they artificially changed the animals’ blood sugar levels. The fluorescence correspondingly increased and decreased as the glucose in the blood spiked and then waned.

Takeuchi is optimistic about the potential future application of the beads in continuous glucose tracking. He says they could ’improve the quality of life for diabetic patients who currently suffer fingertip pricks every four hours or from being wired to a continuous glucose monitoring system.’

Raoul Kopelman, an expert in nanoscale chemical sensors for biomedical applications at the University of Michigan in Ann Arbor, US, describes the work as ’a nice organic synthesis that puts a glucose indicator into a microparticle environment to make it biocompatible, without drastically reducing its performance.’ But he cautions that much development would still be needed to turn the beads into practical devices that could be approved by regulators, and presumably to convince patients to adopt the glowing glucose monitors.