Glucose meter adapted to detect a range of targets

A common test used worldwide by millions of people with diabetes could be adapted to detect and measure almost any target molecule including drugs, environmental toxins and disease markers.

Sensing technology has advanced considerably in recent years, but there are still relatively few low-cost, commercially available portable sensors. Now, Yu Xiang and Yi Lu, of the University of Illinois at Urbana-Champaign, US, have developed a way to harness the ubiquitous personal glucose meter - used by people with diabetes to test their blood sugar levels - to detect, in theory, almost any analyte. 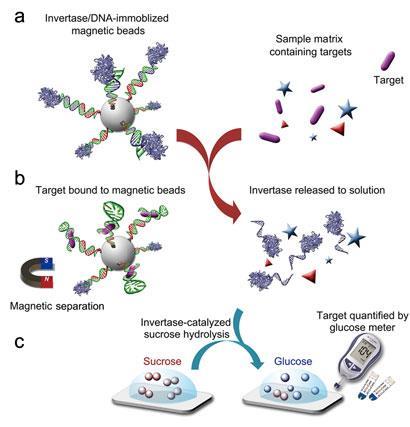 The universal sensor has already been used to detect cocaine, uranium and a biomarker for TB

The team tethered the enzyme invertase, which catalyses the conversion of sucrose to glucose, to magnetic beads using a double-stranded sequence of DNA that included the aptamer (or other type of functional DNA) sequence relevant to the target species. When the system is presented with the target molecule, the target binds to the aptamer and this event disrupts the DNA tether, causing the invertase to be released from the magnetic bead.

The beads can then be removed, leaving free invertase in the solution in a concentration that is quantitatively dictated by the amount of target molecule. The free invertase acts upon sucrose that has been loaded into the system, generating glucose which is then presented to the glucose meter. Xiang and Lu successfully quantified a number of analytes with the system, including cocaine, uranium and interferon-gamma, a marker of tuberculosis.

The prototype system involves two stages for the preparation and testing of samples, but Lu says, ’We are developing simpler procedures. In the near future the kit will be integrated with commercial glucose meter strips so the user will not need to carry two separate components.’

Biosensor experts believe the system has good potential. Christopher Lowe of the University of Cambridge, UK, says that the concept is ’bold and imaginative’ and should be widely applicable. Christopher Gwenin of Bangor University, UK, believes that ’the innovative approach to handheld quantitative analysis is a clear market winner’. Lowe points out, however, that the concept is complex and that ’more work is required to make it robust to the variety of environmental and clinical samples it might encounter, particularly if those samples contain glucose or other invertase substrates or inhibitors, or interfere with the glucose detection systems in the glucose meter itself.’