Benzene and other harmful chemicals absorbed and destroyed by designer plants

US scientists have genetically modified plants to remove and destroy a range of toxic and carcinogenic chemicals from water and air. Cleanup costs billions of pounds globally each year - now some contaminated areas could be cleaned up quickly and safely by planting trees, the team says.

Many plants naturally absorb a number of dangerous substances from the air and soil and metabolise them but the process is far too slow to be useful. Now Sharon Doty’s team at University of Washington, Seattle, has manipulated the plants’ enzymes to speed up the phytoremediation process.

"[The trees are], in essence, a solar-powered pollutant removal system" - Sharon Doty

The team isolated rabbit DNA responsible for the pollutant-destroying enzyme, cytochrome P450 2E1, and integrated it into a poplar hybrid. Testing the plants’ ability to metabolise a range of common industrial pollutants - including benzene, carbon tetrachloride, vinyl chloride and trichloroethylene -they found the modified plants absorbed contaminants three or four times faster than natural plants. 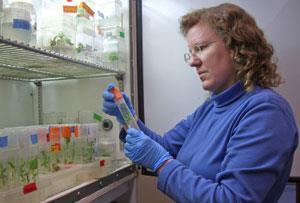 An Environmental Protection Agency report in 2000 said that plants for industrial clean up costs over ten times less than other technologies.

’Although a lot of research is being done on treatment of cancer, far less seems to be done on prevention by removing known carcinogens from our environment,’ said Doty. ’We hope people will be more likely to use [these trees] than abandon property as too expensive to clean up.’

Phytoremediation has clear advantages over mechanical techniques, Pattanathu Rahman at the Clean Environment Management Centre, University of Teesside, told Chemistry World. ’A living organism used in remediation processes contaminants naturally, and no remnant of remediation is left after cleanup as plants are biodegradable.’