Scientists in the US have identified a new class of catalyst based on subnanometer clusters of three silver atoms that could provide a greener route to propylene oxide - a key intermediate used to make thousands of everyday products ranging from antifreeze to cosmetics.

Existing methods to produce propylene oxide either produce harmful by-products, such as acrolein, that have a negative impact on the environment, or are not efficient enough to be profitable. A number of companies have been searching for cleaner and more energy efficient routes to the compound, with chemical giants BASF and Dow investing heavily to develop new technologies.

While routes that use hydrogen peroxide as the oxidant have been devised, until now, researchers have been unable to find a catalyst that could directly oxidise propylene using oxygen without producing large amounts of carbon dioxide.

But now, Larry Curtiss and colleagues from Argonne National Laboratory, Illinois, have done just that, by depositing clusters of silver atoms on an alumina film support. While they studied a range of particle sizes, they found that clusters of just three silver atoms were the most active. Significantly these new silver catalysts only produce a small amount of carbon dioxide and do not produce acrolein. They also work at lower temperatures, helping to keep energy use and costs down. 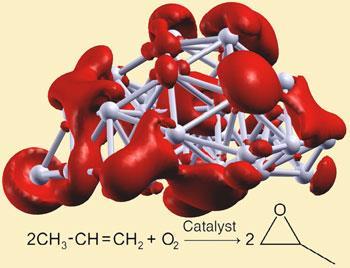 Illustration of spin density on an Ag33 cluster

’The optimum temperature is lower than traditional methods and the reaction has the highest selectivity towards propylene oxide with virtually no carbon dioxide formation,’ says Curtiss.  The turnover rate for these catalysts - the speed at which they complete a catalytic cycle - is greater by a factor of four than gold cluster catalysts under identical reaction conditions, and much greater than reported for any other silver catalyst.

The silver cluster-based catalysts were made by depositing mass selected clusters from a molecular beam onto ultrathin alumina films. In order to discover the origin of the clusters’ high activity, the team conducted theoretical studies which suggest that unpaired electrons in the clusters may account for their improved activity.

Charles Mims, an expert in oxidation reactions at the University of Toronto, thinks that the new catalysts in this study are special. He went on to suggest the unusually high selectivity and activity at low temperatures means the catalysts could be promising if they are stable under industrial conditions. However, he went on to say ’I would like to see a more direct comparison with previous direct propene oxidation results, such as those contained in patents filed by Arco Chemical.’

Curtiss’s team are currently investigating other techniques to scale up the synthesis of these small cluster catalysts so they could be used on an industrial scale. Another area the team wishes to develop is bifunctional catalysis where catalysts are made up of two or more metals that may be able to carry out two catalytic steps in one reaction.