Two medical doctors have won this year's chemistry Nobel prize, while a chemist and a physicist have won the medicine prize.

Two medical doctors have won this year’s chemistry Nobel prize, while a chemist and a physicist have won the medicine prize; such is the interdisciplinary nature of science today, reports Richard Stevenson

Peter Agre of the Johns Hopkins University School of Medicine in Baltimore, US, and Roderick MacKinnon of the Howard Hughes Medical Institute at Rockefeller University, New York, US, have shared the chemistry prize for their discoveries about channels in cell membranes. Appreciating how water and ions pass into and out of living cells is critical to understanding a host of cell functions, from electrical signalling between nerve cells to water recovery by kidney cells or the actions of muscle cells.

Proteins are the key
Living cells are contained within a lipid bilayer membrane. Generally, this is impermeable to water, ions and polar molecules, so when the cell needs to shuttle these in or out it requires selective transport mechanisms. Transport against a concentration gradient is driven by membrane pumps, such as the Na+/K+ ATPase protein discovered in the 1950s by Jens Skou (which won him the 1997 Nobel prize for chemistry). Transport down a concentration gradient and water transport require different kinds of membrane channel proteins, and their structure remained elusive until recently.

For example, maintaining osmotic concentration in a cell needs a selective channel that permits water molecules to pass but bars the way for ions. This is true for animal cells such as kidney or blood cells, and for plant cells such as root cells. The existence of such selective channels had been recognised in the 1950s, but for 30 years no-one knew what they looked like. Then in 1992 Peter Agre (a chemistry major who had gone on to do an MD) realised that a membrane protein that scientists in his laboratory had isolated from red blood cells and kidney cells might be the elusive water channel protein. Agre found that adding the protein known as CHIP28 (it has a molecular weight of 28,000Da) to cells caused them to swell rapidly when they were placed in a hypo-osmotic solution; water was rushing into the cells, driven by the osmotic pressure. When Agre used purified CHIP28 to make a liposome (an artificial ’cell’ comprising a bilayer membrane enclosing a tiny blob of solution) he observed the same phenomenon.

Agre had found the first water transport protein, now known as aquaporin-1 (AQP1). Aquaporin-like proteins have been identified right across nature: humans have at least 11 different ones, several of which are linked to diseases such as congestive heart failure due to water retention, congenital cataracts, and certain forms of diabetes. Plants have even more AQPs, with the humble thale cress (the botanist’s lab rat, Arabidopsis thaliana) possessing no fewer than 35. 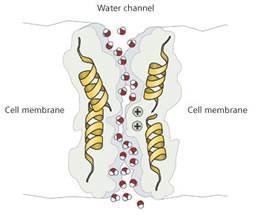 Fig 1. Water molecules passing through the aquaporin AQP1. Positively charged ions such as H3O+ are deflected because of the positive charge at the centre of the channel, preventing proton leakage through the channel.

Recently, high resolution 3D structures have been obtained for AQP molecules and their mode of action is becoming clear. For example, the AQP1 membrane channel consists of four AQP1 monomers arranged so that water molecules can pass through the narrow channel singly, but positively-charged residues lining the channel repel H3O+ (see Fig 1). Furthermore, the local electrostatic field within the channel switches polarity in the middle, forcing the water molecules to rotate as they pass through. This stops chains of hydrogen-bonded water molecules from forming and thereby prevents leakage by proton-hopping (the Grotthus effect, analogous to electrons passing along a copper wire). 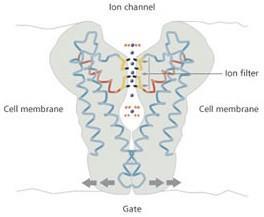 Fig 2. The ion channel allows potassium ions to pass through

Size isn’t everything
A question that intrigued early physiologists was how nerve cells carry electrical signals. Half a century ago, Alan Hodgkin and Andrew Huxley proposed that the nerve is like an electrical cable, with the membrane acting as an insulator and the salt solution inside carrying the current. They realised that the membrane has to become permeable in a specific localised region to allow ions through when there was an appropriate voltage change. Thus was born the concept of the voltage-gated ion channel, and Hodgkin and Huxley shared the Nobel prize in 1963. Later, researchers discovered that these channels were selective: a sodium ion channel would not allow potassium ions to pass, and vice versa, even though the charges are identical. Clearly, something more than simple size exclusion was in operation, otherwise the smaller Na+ (ionic radius 0.95?) would pass easily through a channel formed for K+ (1.33?).

Roderick MacKinnon, who had studied biochemistry before becoming a doctor, became so interested in the ion channel problem that he entered research at the relatively late age of 30 to work on it, learning X-ray crystallography so that he could study the proteins involved. Within a few years he had startled the research community by publishing the first high resolution structure of a K+ ion channel, which allowed him to explain in detail how the ion filter works.

MacKinnon also showed that once the K+ is inside the pore, it is held in a water-containing cavity formed by the negative ends of helices within the protein structure. This stabilises the ion and lowers the energy barrier that the membrane otherwise presents. The hydrated ion is released by a molecular gate that opens in response to an appropriate stimulus, which, depending on the type of channel, may be an electric voltage across the cell membrane, an increase in calcium ion concentration, or the presence of a signal molecule.

Potassium channels pass electrical signals in nerves and muscles: they control the brain and nervous system, movement of limbs, the operation of the heart, the blood system and the airways. Thus they provide huge opportunities to develop pharmaceuticals either to target specific ion channel abnormalities, or to control the processes that lead to hypertension, heart arrhythmia or asthma, for example. It is no wonder that MacKinnon’s discovery less than six years ago has already led to him being awarded the Lasker prize for medicine and now the Nobel prize.

Seeing into the body
Other breakthroughs take longer to be recognised by the Nobel committees. An American chemist, Paul Lauterbur, and a British physicist, Sir Peter Mansfield, have shared this year’s Nobel prize for medicine in recognition of their development of magnetic resonance imaging (MRI). Lauterbur, at the University of Illinois at Urbana-Champaign (UIUC), won a Lasker prize almost 20 years ago, while Mansfield, at Nottingham University, was elected a Fellow of the Royal Society in 1983 and knighted in 1993, and their invention has become a staple of modern medical practice. Since the early 1980s, MRI scanners have become the medical imaging tool of choice and it is estimated that over 20,000 have been installed worldwide, with more than 60 million scans being performed each year.

Lauterbur’s insight, in 1973, was to take the chemist’s tool of nuclear magnetic resonance (NMR), used for structural analysis of molecules, and introduce gradients into the magnetic field so that he could build up a two-dimensional picture. Mansfield’s contribution was to develop mathematical methods to analyse the signals from 2D NMR, which made high-speed imaging practical.

Using 2D proton NMR allowed researchers to map the distribution of water molecules in the body, and thereby study pathological conditions. For example, most brain disorders involve a change in water content, which shows up in the image. Multiple sclerosis involves inflammation of the sheathes of nerve cells, and its progress and the effects of treatment can be followed. Scans can also show whether lower back pain is due to muscular causes or results from pressure on a nerve. Being non-invasive and not involving radiation (the medical profession prefers to drop the word ’nuclear’ and simply refer to magnetic resonance) MRI is safer and more comfortable for the patient than X-rays or endoscopy.

Weirdness at low temperature
High-field NMR spectrometers and MRI scanners rely on superconducting electromagnets and this year’s physics prizewinners have been recognised for their contributions to the theory of superconductors. Vitaly Ginzburg of the P. N. Lebedev Physical Institute in Moscow, Russia, and Alexei Abrikosov, also Russian-born but now at the Argonne National Laboratory in Illinois, US, share the physics prize with British-born Anthony Leggett, now at UIUC, whose theoretical work applies to superfluids as well as superconductors. While superconductors exhibit no electrical resistance, superfluids have no viscosity and have strange flow characteristics.

In 1972, John Bardeen, Leon Cooper and Robert Schrieffer were awarded the Nobel prize for their ’BCS’ theory, which used the concept of a condensed ’electronic liquid’ formed of Cooper pairs of negatively charged electrons to explain how some superconductors work. Although adequate for so-called type I superconductors operating close to 0K, the BCS theory fails to account for type II superconductors, which retain their superconductivity in strong magnetic fields and at higher temperatures (around 77K). Ginzburg and the late Lev Landau introduced a wave function to describe the density of the superconductive condensate in type I materials, and later Abrikosov was able to show that this also accounted for the behaviour of type II superconductors.

Meanwhile, Landau had also explained the phenomenon of superfluidity in condensed 4He, for which he won the Nobel prize in 1962. When it was discovered that 3He could also be condensed into a superfluid state, Leggett - then at the University of Sussex - showed that a mechanism much like the formation of Cooper pairs in superconductors could account for the more complex properties of 3He. For example, whereas the magnetic properties of electrons forming Cooper pairs cancel out, the magnetic properties of 3He pairs are cooperative and the liquid is anisotropic. Indeed, the phase diagram of 3He involves the strength of the magnetic field as well as the more familiar pressure and temperature axes. Leggett’s theory has also been invoked to explain quantum effects in particle physics and cosmology.

And finally...
This year’s IgNobel prizes, awarded by the Harvard-based Annals of Improbable Research to honour (if that is the right word) research that ’first makes people laugh, then think’, included a chemistry prize for Yukio Hirose of Kanazawa University in Japan. Hirose carried out a chemical analysis on a bronze statue in Kanazawa to find out why it seemed to be ignored by pigeons.