Gold clusters assemble into double-helical supercrystals using similar pairing principles to those found between DNA base pairs, scientists have discovered.

DNA has previously been used to create helical DNA–nanoparticle hybrid structures, but this is the first time nanoclusters have been known to self-assemble into a double helix. Without help from biological molecules, helices are difficult to build as they require a delicate balance between repulsive and attractive forces – in DNA, these are ionic interactions, and π stacking and hydrogen bonding, respectively. 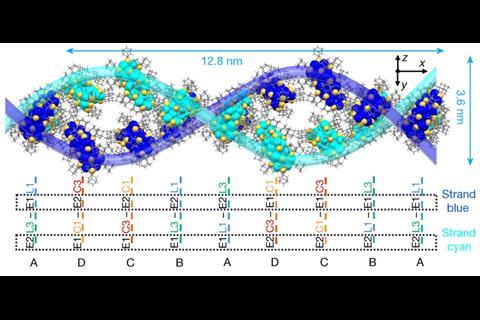 When extending the unit cell along the x axis, the nanoclusters form double-helical patterns, with both left- and right-handedness present 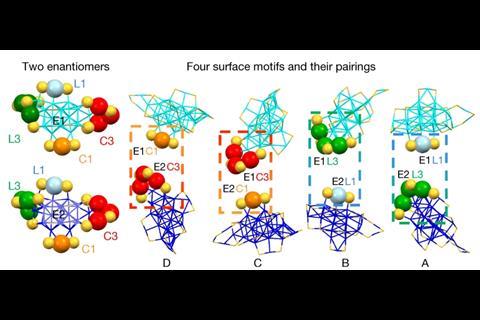 In the superlattice, the two neighbouring enantiomers approach each other by matching their C1 and C3 staple motifs, or their L1 and L3 staple motifs

The new nanoclusters, synthesised by a team of chemists in the US and China, each have 29 gold atoms and 19 adamantanethiolate ligands Au29(SAdm)19. They form two enantiomeric strands that arrange themselves into a double or even quadruple helix. Each helix pitch contains 16 nanoclusters and measures 12.8nm – much larger than DNA’s 3.4nm pitch length.

The assembly originates from four different substructures or motifs that form two pairs, similar to DNA’s base pairs. Each pair is held together by balanced attractive conformational matching and repulsive steric interactions. A similar gold compound – Au30(SAdm)18 – also creates two enantiomers but does not assemble helices as it possesses only a single pair of matching motifs.

The double helix turned out to have a 65-fold longer lifetime of its photoexcited state than the non-helical Au30(SAdm)18. Moreover, the helix’s long-range coherence enhances its photoluminescence.

The researchers suggest that the information these nanocluster assemblies reveal could help them design other atomically precise supercrystals as well as better understand processes in biological supramolecules, like protein folding.