Graphene catalyst comes out on top

Sulfonated graphene solid acid catalysts could be cheap, environmentally friendly alternatives to concentrated sulfuric acid for use in industry because they can be recycled, say scientists from China.

Xiaobin Fan and colleagues at Tianjin University made the solid catalyst by adding 4-benzenediazoniumsulfonate to a graphene suspension. When they tested its activity against other catalysts in ethyl acetate hydrolysis, they found that it had comparable activity to concentrated sulfuric acid catalysts and had higher activity than Nafion NR50, a commercial solid acid known for its excellent activity.

Acid sites in most solid catalysts can be degraded by water in reactions, but Fan’s catalyst is stable in water and can be reused without decrease in activity. Liquid acid catalysts are efficient but non-recyclable, explains Fan. It’s also costly and difficult to remove liquid catalysts from the reaction mixture and leads to unrecyclable acid waste. 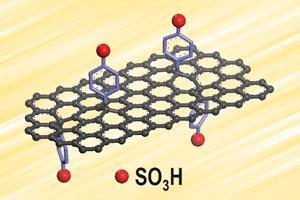 Sulfonated graphene catalysts can be recycled after a reaction, unlike sulfuric acid

’Graphene has excellent mechanical properties, a large surface area and two-dimensional structure,’ says Fan. ’It provides an ideal platform to anchor a large amount of acidic functional groups. Also, as the reactants can get to the acidic functional groups on both sides of the graphene sheets, most of the active sites should be accessible.’

Fan hopes to test the catalyst further in acid-catalysed reactions such as hydration and esterification, making use of the solid catalyst’s water-tolerant nature. ’New kinds of graphene-based solid acid catalysts other than the sulfonated graphene should be studied,’ he adds.

’The recent Nobel prize for physics has catapulted graphene to one of the best known materials in the world,’ says James Clark, an expert in green chemical technology at the University of York, UK. Despite the large amount of research on graphene, Clark is surprised that this is the first report of a graphene-based solid acid catalyst. ’Whether this material can successfully compete with the many known and often cheap acid catalysts remains to be seen,’ he says adding that stable, reusable solid catalysts that function in water will become increasingly important as we develop new chemistry pathways based on platform molecules created in fermentation processes.