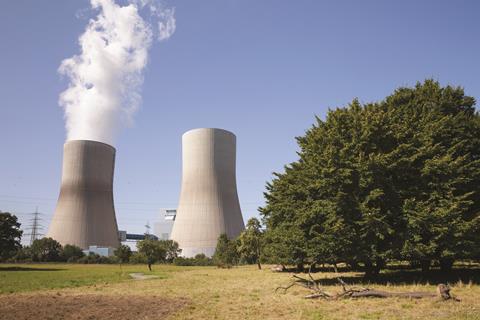 Could grass become the ultimate watchdog to keep an eye on whether power stations claimed carbon dioxide emissions are truthful or not?

Independent estimates are needed to back up self-reporting of emissions associated with international climate deals, Turnbull explains. Her team’s approach reduces uncertainty in such estimates from 20–30% to less than 10%. ‘This makes the methodology useful to regulators and policymakers and is a big step over previous work,’ she tells Chemistry World.

The New Zealand scientists track the isotope carbon-14, which left to itself slowly decays to nitrogen. In the atmosphere cosmic rays keep making carbon-14 from nitrogen, whereas all the carbon-14 in fossil fuels deep underground has decayed away long ago. Fossil fuel carbon dioxide emissions, for example from electricity generation, therefore release only stable carbon-12 and carbon-13 isotopes into the air, diluting carbon-14 levels.

Previous attempts to use this dilution to measure emissions from individual ‘point sources’ like power stations collected air for a few minutes. Over such short timescales, atmospheric turbulence makes it hard to relate measurements to original emissions. Collecting carbon-14 samples over longer periods allows computer models of carbon dioxide’s travels through the atmosphere to ‘average out’ rapid variations from turbulence, Turnbull’s team realised.

They tested the idea at a natural gas extraction site that emits over 350,000 tonnes of carbon dioxide per year. They collected grass, which slowly consumes carbon dioxide as it grows, from various surrounding locations, burning it to regenerate the gas in the lab. They also pumped air through sodium hydroxide over five consecutive days, later retrieving carbon dioxide by adding phosphoric acid. They then reduced the carbon dioxide to graphite, and measured carbon-14 using accelerator mass spectrometry.

Cathy Trudinger from the Commonwealth Scientific and Industrial Research Organisation in Melbourne, Australia, calls getting emissions information from grass ‘an interesting result’. However, she adds that accessing locations downwind from emission sources to collect samples may not always be possible. ‘It is not clear yet how broadly applicable this method will be,’ she says. ‘It may be useful as part of a suite of verification techniques.’ In the method’s favour, Turnbull emphasises that it isn’t expensive, and all the possible ways to cheat it are difficult, so it is ‘fairly robust against gaming’.