Quantum mechanics explains why green tea is good for you

Scientists have used quantum mechanics to work out why green tea is good for you. The health benefits of the brew are all down to a quirk of the quantum world known as tunneling, they say. 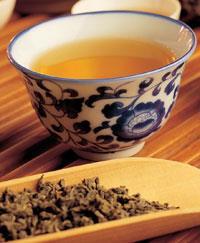 Green tea is traditionally associated with good health and long life - benefits linked to chemicals known as catechins, which act as antioxidants. These polyphenolic flavonoid compounds disrupt the damaging chain reaction between free radicals and lipids.

But no one understood how catechins work at micromolar concentrations in the body. Now, ?ngels Gonz?lez-Lafont and colleagues at the Autonomous University of Barcelona in Spain have modelled the chemical reaction that allows green tea catechins to zap free radicals.

The reaction involves the catechin losing a hydrogen atom to a reactive free radical. The scientists found that in this process the radical and catechin were bound together tightly, leading to very small energy changes as the reaction proceeds.

The compact structures and narrow energy profile revealed by Gonz?lez-Lafont’s calculations allows for a huge tunneling effect in the hydrogen transfer step.
Tunneling can help quantum particles overcome otherwise insurmountable energy barriers. It relies on that fact that particles can behave like waves. If this waveform extends to the other side of the energy barrier, there is a significant probability that the particle will pop up on the other side of the barrier, as if it had tunneled through a hillside.

Tunneling makes the hydrogen transfer much faster than the free radical’s reaction with the body’s vulnerable lipids so the radicals are trapped before they can do harm.

’Tunneling is a ubiquitous phenomenon in nature’, Gonz?lez-Lafont told Chemistry World. ’Our finding could also be useful to understand the molecular basis for the antioxidant activity of other compounds,’ she said. Joe Vinson, who studies antioxidants at the University of Scranton, Pennsylvania, US, welcomed the findings.

’It’s really astounding what this [research] has done for the rest of us,’ said Vinson. ’We had a problem understanding how polyphenols work at such low concentrations. This paper gives theoretical credence to a large amount of experimental evidence of polyphenols as in vitro and in vivo antioxidants.’