Greener flares better for the environment

Polluting perchlorates replaced with a cheap, energetic nitrogen-rich compound and may even mean less smoke and better fireworks displays 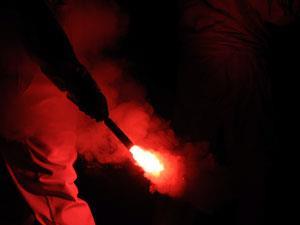 A discussion about green flares might bring to mind the colour, but the military also cares about their pyrotechnics environmental credentials. ‘You might not think the military and environmentally friendly go together,’ explains Jesse Sabatini from the US Army’s Picatinny Arsenal, ‘but they really do.’

As regulation surrounding soil and groundwater contamination increase, the simple act of training on a military range can have wide reaching implications. Sabatini and colleague Jared Moretti are working to make the tools of the military a little more green and in their most recent work have replaced the perchlorate salts in flares with the cheap and widely used 5-amino tetrazole (5-AT). The goal, stresses Sabatini, was to match the performance of in-use formulations, not just meet the minimum required.

Perchlorate salts have been widely used as an oxidiser in explosives and pyrotechnics because they’re stable but supply a large amount of oxygen when burnt. And because perchlorate salts are so widely used and easy to make, they are also cheap. However, concerns surrounding the role of perchlorate salts in human health are growing and the US now has stringent limits on the amount of perchlorate allowed in drinking water (15 parts per billion federally, although some states have set their limits even lower). That’s led to some military ranges being closed for clean-up and troops being unable to train extensively with the flares they might have to use in combat.

Sabatini has already come up with a solution to the problem, or rather two, by replacing the perchlorate with high nitrogen salts of strontium and barium for red and green flares respectively. This proved that pyrotechnics can work with high nitrogen compounds instead of perchlorate salts, something already established in propellant and explosives research. But, says Sabatini, there are a number of drawbacks to using such specialised compounds. ‘You’ve got a big cost issue because, number one, you’ve got two different syntheses you have to do and neither of them are commercially available. That obviously adds to the cost,’ he explains, adding that qualifying ingredients and new formulations also adds to the cost.

After trying various compounds that looked like they might do the job, the pair settled on the small molecule 5-AT, which is used in explosives, airbags and the pharmaceutical industry. That large market means the compound is much cheaper than Sabatini’s metal salts. By tweaking the formulation, Sabatini and Moretti made perchlorate free flares using 5-AT that matched the performance of two currently used flares, the red M126 A1 and green M192.

‘I’m always impressed with the work that Sabatini does,’ says Thomas Klapötke of the University of Munich, Germany, who also works on energetic materials. ‘Not only is it scientifically sound but he also has the right feeling to make it applicable. There’s no point in replacing perchlorate with something less toxic if the price goes up.’

Of course, as always there’s a long way to go from lab success to seeing the new formulation replacing the old. A host of tests still await the new flares before they are ready to go in the field.

But if the new formulations work as well in tests then there are many other pyrotechnics that could also be reformulated to remove perchlorate, including noise generating pyrotechnics and fireworks. For those applications, adds Klapötke, there could be an unexpected benefit – 5-AT generates clear nitrogen gas instead of smoke. ‘If you go out on bonfire night and look at the fireworks it’s often quite smoky. If you produce large amounts of N2 you can increase the visibility of the firework,’ he adds. It’s a long way to go, but perhaps the general public as well as the military will benefit from this new approach.