The device was created using small thin strips of tissue made from heart muscle cells that are connected to electrodes to stimulate contraction. Observing the contraction response of the tissue allows scientists to study the effect of physiological factors or test drugs for cardiotoxicity. Replicating segments of heart tissue makes it possible to rapidly measure contraction data at the tissue level, rather than just studying individual cells.

The researchers, led by Kevin Parker from Harvard University, Cambridge, created up to eight separate strips of tissue on one chip by growing a sheet of heart muscle cells in a flat film and then cutting away sections to leave isolated strips that were only connected to the film by one edge. Creating several strips on one chip allowed the team to conduct multiple experiments at once. The contraction experiments were observed by looking vertically down onto the chip and monitoring the change in length as the strips contracted and bent up. ’The heart-on-a-chip allows us to capture in 2D what a healthy or diseased heart might look like and look at how much force the tissue will generate,’ says Anna Grosberg, a member of the research team. 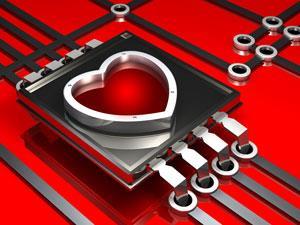 The team then used the heart-on-a-chip to investigate the effects of different environments on contraction response. Experiments with epinephrine (adrenaline) showed the device can be used to measure the dose-dependent effect of drugs on contraction response. The team also showed that the heart-on-a-chip can be used as a platform to investigate the effect of cell architecture on tissue contraction.

’The heart-on-a-chip technology is the first scalable technique that recapitulates in vitro the anisotropic cell organisation of native cardiac muscle, while simultaneously allowing coupled electrical and mechanical function to be quantitatively assayed,’ says Andrew McCulloch, an expert in cardiac bioengineering at the University of California, San Diego, US. ’Once this technology can be deployed using human stem cell-derived cardiomyocytes, we will have a powerful new platform for screening new drugs for heart diseases like arrhythmia and heart failure.’