Russian and American scientists claim to have discovered element 118, the newest and heaviest addition to the periodic table.

A team of Russian and American scientists has claimed the discovery of element 118, the newest and heaviest addition to the periodic table. Three atoms of the element were produced between February and June 2005, at the Joint Institute for Nuclear Research (JINR) in Dubna, Russia.

The experiment supports the suspected creation of one atom of the superheavy element in 2002, says the Russian team, who worked with scientists from the Lawrence Livermore National Laboratory, California, US.

The new element is the heaviest ever created, with a relative atomic mass of 294. It was made by bombarding a californium target with a beam of calcium ions. Each of two separate experiments shot around 1019 calcium ions at the target, but only three ion collisions resulted in successful production of element 118. 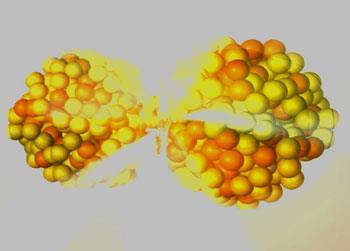 The particle begins to decay and eventually fissions.

The three atoms the researchers produced existed for less than a millisecond, said Dawn Shaughnessy, a member of the Livermore team. As the unstable nuclei rapidly fell apart to lighter elements, they shot out characteristic streams of alpha particles which enabled their detection.

The chance of these alpha decay sequences being random artefacts in the experimental data is less than one part in ten thousand, said Livermore researcher Nancy Stoyer. But the discovery is yet to be confirmed by other research groups.

Claims of element 118’s discovery have been made and retracted before. In 1999, a team from the Lawrence Berkeley National Laboratory, California, announced they had discovered elements 116 and 118. Those experiments involved firing krypton ions at a lead target. Two years later, the claim was retracted; it emerged that one physicist on the team had faked the evidence. Ironically, Livermore’s team leader Ken Moody says the Berkeley group is now best placed to confirm the new discovery.

Scientists can’t yet do chemistry with element 118, because it is so short-lived. But when the new element is slotted into the periodic table, it comes directly below radon, so may well behave like the unreactive noble gases.

The search for new elements offers more than the simple excitement of a step into the unknown. Scientists hope that the discovery of new elements will develop our understanding of the atom’s internal structure.

Although superheavy elements seem to be very short-lived, theory predicts that atoms with certain ’magic number’ combinations of protons and neutrons might be unusually stable: the fabled island of stability. ’We’re still nibbling away at the shores of the island of stability,’ said Moody.

Next up for the researchers is an attempt to create element 120, by firing a beam of iron ions at a plutonium target. ’The heavy element community will continue to search for new elements until the limit of nuclear stability is found,’ said Livermore researcher Mark Stoyer. ’It is expected that limit will be found.’

US and Russia collaborate on new elements

A team of scientists from the US and Russia claims to have successfully created two new super heavy elements.