A 12-membered bismuth ring has become the biggest Hückel aromatic molecule made purely from metal atoms.1 Despite having only two π electrons, the compound’s ring current – an indicator of aromaticity – is similar to that of porphine with its 26 π-electrons.

Since the discovery of aromaticity in the 19th century, it has been a property mostly reserved for carbon compounds with the occasional heteroatom. In 2001, chemists reported the first all-metal aromatic compound, a four-aluminium ring.2 Over the years, more examples of π-aromatic clusters have emerged, though none of them containing more than five metal atoms.

‘Our compound is a new milestone, as the system is much larger,’ says Stefanie Dehnen from the University of Marburg in Germany. Together with her colleague Florian Weigend, she led a team that has made an anionic 12-bismuth ring stabilised by a central thorium cation. It is the biggest all-metal molecule that is aromatic according to Hückel’s 4n+2 rule.

‘Although it’s difficult to quantify, we call its aromaticity “substantial” because only two [π] electrons do the job of creating a huge ring current, which before has not being seen,’ Dehnen says. The ring current is twice as strong as in benzene and similar to what is seen in porphine, a 26 π-electron compound.

Unusual about the molecule is not just its size, it’s also that it isn’t planar – apparently violating one of Hückel’s criteria for aromaticity. ‘We interpreted this planarity argument more into the direction of symmetry,’ explains Dehnen. ‘It’s a very symmetric compound, and although the ring is not planar – it’s more like a doughnut in which the ring current occurs – it’s very similar to the one that you find in benzene.’

The team took great care to verify the molecule’s aromaticity, calculating its ring current and nucleus-independent chemical shift using every kind of computational method in the book. ‘Luckily, the quantity in the end was always more or less the same – so we are really very sure about the large ring current,’ says Weigend. The reason this was so important, notes Dehnen, is that ‘there are a lot of papers in the literature that define everything that is somehow not localisable as aromatic, including the typical property of metal clusters as having cluster orbitals.’ 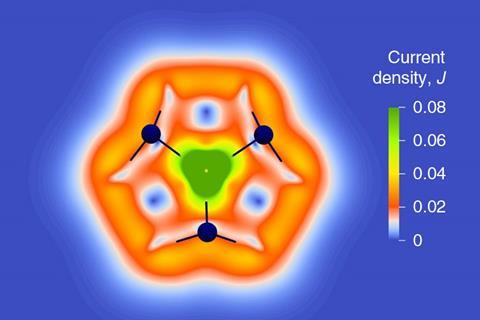 The torus-shaped current density is similar to that in planar rings, despite the perpendicularly oriented bismuth atoms

‘I think [with this molecule] metal aromaticity has expanded to macrocyclic aromaticity,’ says Miquel Solà who works on catalysis and aromaticity at the University of Girona in Spain. The cluster is also surprisingly stable, he says, existing both as a solid and in solution. ‘Most [all-metal aromatics] you cannot have in a bottle.’ Many have never been isolated, existing only in the gas phase, or can only be stabilised by an array of bulky ligands.

Dehnen hopes that the findings serve as an inspiration, ‘that you should never stop with things that you know’. Uncommon compounds such as this one can serve as molecular models of metal alloys and could even be used as catalysts. The Marburg team is now examining whether the cluster shows reactivity typical for aromatics, for example susceptibility to electrophilic substitution.