A string of serious poisoning incidents caused by industrial pollution have triggered strong public protests across China, but experts say the events could represent an opportunity to improve the nation’s environmental protection.

A serious case of pollution in Fengxiang County in northwestern Shaanxi Province in early August led to 174 children from three villages being diagnosed with lead poisoning, with 851 of 1,016 children tested found to have abnormally high levels of lead in their blood.

The poisoning, very likely caused by pollution from a nearby smelter, has led to violence among outraged parents, who reportedly smashed trucks and tore down fences to protest at the government’s slow response to the incident. 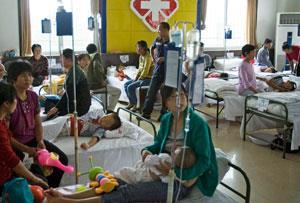 The lead poisoning was detected thanks to an unscheduled test, which showed that 20 out of 30 children had high levels of lead in their blood. Excessive amounts of the heavy metal can stunt children’s growth, cause muscle weakness and potentially harm the brain.

The Fengxiang case followed another heavy metal poisoning incident in central China’s Hunan Province. By the end of July, 509 of 2,888 local residents tested in Liuyang city had been found to have excessively high levels of cadmium in their urine. On 30 July, thousands of angry residents besieged local government buildings and the police station to protest against the pollution, which environmental experts believe to come from a nearby Xianghe Chemical Company site.

Heads at the firm have been arrested and the factory closed permanently.

However, unlike the Hunan case, the only lead smelting firm in Shaanxi - Dongling, widely believed to be the major source of the lead pollution - meets pollution emission standards, according to local government.

She adds that there are many ways for polluters to get around environmental monitoring, such as discharging pollutants during the intervals between inspections.

’If we add heavy metal testing to regular medical checks, as in the West, many polluters could be identified and stopped,’ Huo told Chemistry World.

Separately, Hu Wenbiao, chairman of Biaoxin Chemical Company, was recently sentenced to 10 years in prison for the firm’s illegal discharge of pollutants that poisoned drinking water for 200,000 local residents in late February.

The sentence is the most serious ever given to a polluter in China. Liu Jianlong, a legal expert at Beijing-based All-China Environment Federation, says that the 10-year imprisonment is a clear sign of the end of mild penalties for environmental polluters, pressuring them to abide by environmental rules.