Helicene twists aromaticity to its limit 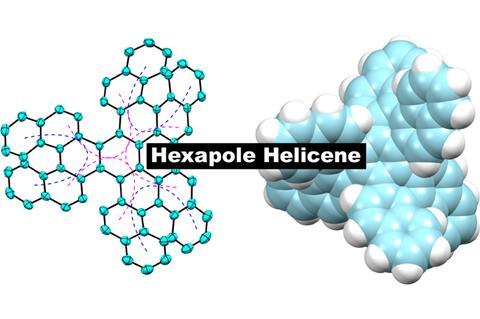 A molecule with 16 fused aromatic rings has set a new record for the most twisted benzene ring ever created.

With a twist angle of 35.7° in one of the central benzene rings, the helicene beats the previous record holder’s 35.3° by a narrow margin. The extra-twisted ring also has the lowest aromaticity value ever measured, pushing Hückel’s rule – which states aromatic molecules must be planar – to its limits.

Researchers from Japan prepared the compound by merging three precursor molecules in a single cycloaddition. Although the helicene doesn’t have any chiral atoms, steric interactions between the rings can, theoretically, produce 20 stereoisomers. However, the scientists only found a single saddle-shaped isomer, which when heated converts into a propeller-shaped molecule.

Helicenes’ and other twisted aromatics’ unusual electronic and optical properties might eventually enable their use in materials or catalysis.