Helping the fight against flu

With up to five million cases of the acute respiratory illness influenza leading to half a million deaths each year worldwide, the search for better treatments is important. Scientists from Australia and the US have developed a synthesis for a drug that gives higher yields and antiviral activity than currently used commercial drugs, such as Relenza (zanamivir) and Tamiflu (oseltamivir), they claim.

Although existing dimeric zanamivir compounds show significant therapeutic potential, the currently used synthesis method only produces the compounds in moderate yields. Benjamin Fraser from the Australian Nuclear Science and Technology Organisation in collaboration with Alastair Draffan at Biota Holdings in Melbourne and K. Barry Sharpless at the Scripps Research institute in San Diego have designed a higher-yielding synthesis route, which can also prepare the dimers with new linker functionality.

The group prepared the new class of zanamivir dimers by using a known cycloaddition reaction that improved the coupling yields and allowed rapid optimisation of the antiviral activity as a function of the linker length. The dimers synthesised are among the most effective inhibitors of influenza to date, being up to 3000 times more potent than zanamivir. This potency may be because the dimers work by a dual mechanism: they inhibit neuraminidase (an enzyme on the virus’ surface and a target in influenza treatments) and their aggregation is enhanced. 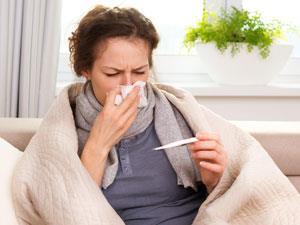 Although vaccination programs reduce the risk of an epidemic influenza outbreak, there is still a need for antiviral drugs

Fraser comments that the dimers are still at the research stage, so a significant amount of further testing is required before the drugs can be ready for human use. The group hopes to radiolabel the compounds in the future so the bio-distribution, metabolism and retention time in the lungs can be measured. Fraser also mentions that it may also be possible to obtain even greater antiviral activity by developing high order multimers, including trimers and tetramers of zanamivir, as each neuraminidase receptor on the virus has four active sites.

Although neither approach used by the group is new, comments Hans Streicher at the University of Sussex, UK, the study adds ‘valuable information regarding the optimal distance’ between the inhibitor moieties, and will thus aid the development of a new generation of anti-influenza drugs.