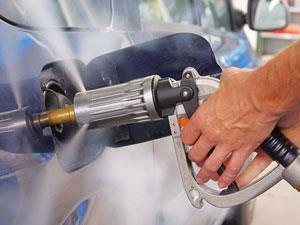 Vehicles powered by natural gas are cleaner than those running on petrol, and are of increasing interest to those living in countries that have to import oil.  But the high pressures at which gas must be stored require expensive materials and distribution infrastructures, as well as radically different vehicle designs.

Metal organic frameworks (MOFs) could be the answer to the problem. These materials – which comprise metal ions connected by organic linkers – are able to store high quantities of gas at lower pressures than are required by traditional gas cylinders, for example. But their low capacity and the scale on which they can be synthesised have prevented their practical use so far.However, a Cu(II)-based MOF, made independently by scientists at both the University of Nottingham, UK and Northwestern University in Evanston, Illinois, US, could change this.1,2

Omar Farha, Radnell Snurr and Joseph Hupp at Northwestern, along with Taner Yildirim of the National Institute of Standards and Technology in Gaithersburg, Maryland, have synthesised the new MOF in gram-scale quantities and established it has 67% of the deliverable storage density of gas cylinders, but at only a quarter of the pressure.

‘What this [reduction in pressure] is going to do is reduce the compression cost,’ explains Farha. ‘The infrastructure will become cheaper – you won’t need compressors to compress natural gas up to 250 bar.’

Farha’s research team designed the material by considering the criteria that were needed. The proposed structure consisted of copper ions connected by new hexa-carboxylic acid linkers, which provides greater porosity than MOFs made with conventional linkers. A computer simulation was then used to confirm that the material could deliver the required properties before scaling up and synthesis was carried out.

The researchers tested the material’s stability by repeated adsorption–desorption cycling over the course of a month, which revealed no degradation in performance. Isotherms were also measured on larger scales, using a gram of the MOF, and the physical properties found to be the same. ‘This suggests the material can be activated very well,’ comments Farha.

Russell Morris, of the University of St Andrew’s, UK, praises the researchers’ achievements: ‘I think the capacity is pretty much getting near to being enough,’ he says, but warns that the researchers need to explore the effects of impurities and stability over longer periods. Farha agrees, revealing this is the group’s next step, along with optimisation of the deliverable gas capacity even further.

Martin Schröder, who leads the Nottingham group, also has doubts over real-world practicality: ‘Any gas stored would have to be very pure to prevent the material degrading. This undoubtedly adds complexity and cost to the production and distribution of such a potential fuel.’