Universities in England lose almost £1 billion in funding, with cuts coming sooner than expected and money focused on elite research

Universities in England will lose ?940 million in funding in the next financial year with severe cuts to capital budgets and teaching.

University leaders have learned the full extent of the austerity ahead for the higher education sector as the Higher Education Funding Council for England (Hefce) announced cuts to budgets from April 2011.

In the next financial year, ?4339 million will be allocated to universities for teaching representing a further reduction of ?180 million (4 per cent). The research budget will also be cut by ?17.4 million (1.1 per cent) in the coming financial year and this reduced funding will be allocated more selectively. In practice, this means that research rated 2* - internationally recognised in terms of originality, significance and rigour - will not receive ’quality related’ funding from Hefce. Instead this funding will be focused on 3* and 4* research - that rated as ’internationally excellent’ and ’world-leading’ - as demanded by the Department of Business Innovation and Skills when it allocated funding for higher education in December last year. 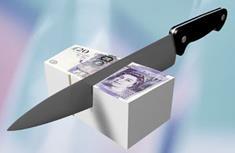 The cuts will take effect in two months and have an impact on teaching and research for the remainder of the academic year and in to the future.

Alan Langlands, chief executive of Hefce called it a ’challenging financial settlement’ but noted that institutions had anticipated the difficulties ahead and already taken actions to cope with the cut in funding.

The science capital budget, which lies outside the science ring fence and funds infrastructure projects, will be drastically slashed from ?158 million previously to ?53 million in 2011-12, representing a 66 per cent decrease. This cut will make securing funding for new equipment and facilities at universities increasingly difficult and may force increased pooling of resources between institutions.

Director general of the Russell Group of universities, Wendy Piatt, is concerned that cuts to capital spend will create long-term difficulties for UK universities and that significant cuts to the teaching budget for 2011-12 will ’reduce the resources available to us to teach students who are already at university, and those who will start their courses next year.’

Tom Welton, head of the chemistry department at Imperial College London, agrees that the loss of Hefce funding and the time lag until increased fees are introduced in 2012 will be very damaging to science departments and institutions across the country. He also thinks the statement that science has been ring-fenced is misleading. ’Exactly the same amount of money is being withdrawn from the teaching of chemistry as is being withdrawn from the teaching of history. It is just that chemistry is more expensive to teach so the cut does not completely wipe out the budget.’