US chemists race against time to recreate sunsets

US chemists are racing against time to recreate sunsets which have disappeared from the watercolours of American painter Winslow Homer (1836-1910). 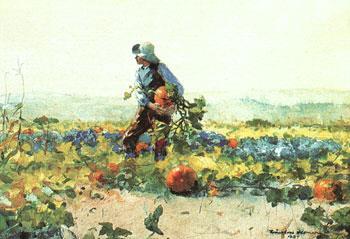 For to be a farmer’s boy: a challenge for conservators

The Art Institute of Chicago is planning a major exhibition of Homer’s work in Spring 2008. But art conservators working behind the scenes have discovered that the striking white skies in watercolours like ’For to be a farmer’s boy’ (pictured) were originally painted in unstable red and orange dyes which have faded almost entirely. Now researchers are hoping to work out the skies’ original colours in time for the exhibition.

Francesca Casadio, a conservation scientist working at the Art Institute, will use surface-enhanced Raman spectroscopy (Sers), a technique pioneered in 1977 by Richard Van Duyne at Northwestern University, Illinois. ’Without Sers it would be impossible to work out what pigment was where,’ said Casadio. Sers dramatically increases the number of photons scattered by the Raman effect, making it a more sensitive fingerprinting tool.

Her team aims to take tiny particles of pigment from the painting, and compare their Sers signatures with a library of other pigments they have built up. Although conservators would never repaint altered skies onto the original watercolours, Casadio hopes that the analysis will make an accurate digital recreation possible.