How plants shudder at shade

Amateur gardeners take note: scientists claim to have worked out how plants channel energy away from leaves and into spindly shoots, a natural but at-times infuriating response to a bit of shade.

Plants are sensitive to the wavelength of light that’s reaching them. A particular balance of red to far-red light - created after filtering through the leaves of neighbouring competitors - triggers a ’shade avoidance response’ (SAS) characterised by rapid synthesis of the plant hormone auxin and a sudden, desperate spurt of growth.

After a forensic-style investigation of SAS in the model plant Arabidopsis thaliana, an international team of scientists has mapped out a molecular pathway that may be crucial for this reaction. Interfering with this pathway could be an effective way to prevent SAS, says Joanne Chory, professor of plant biology at the Salk Institute for Biological Studies in La Jolla, California. ’Suppressing the shade avoidance reaction in crops may allow us to increase biomass and seed yield,’ she says. 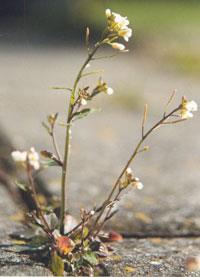 Arabidopsis thaliana, a model organism for plant biologists, enjoys a bit of sun

Chory and her colleagues began by studying the genomes of Arabidopsis strains that don’t show SAS. One gene they focused on turned out to encode an enzyme with an active site predicted to bind to tryptophan, an amino acid needed to make auxin.

Further experiments confirmed that the enzyme catalyses the formation of indole-3-pyruvic acid from tryptophan, the first step in a previously predicted auxin biosynthetic pathway. ’When the major photoreceptor for shade avoidance detects neighbours, it triggers the TAA1 [tryptophan aminotransferase of Arabidopsis] pathway resulting in a rapid increase in free auxin, which is transported to sites in the stem where it can participate in the growth response,’ explains Chory.

This is not the only way that plants make auxin, but it appears to be needed to make enough of the hormone to trigger an appropriate response to shade, she and her colleagues report in the journal Cell.

This finding is highly significant, says Leonid Kurepin, a plant scientist at the University of Calgary in Alberta, Canada. ’It demonstrates that plants may have developed different pathways of auxin biosynthesis for different stimuli to give them very precise ways of controlling growth,’ he says.

But Kurepin questions whether blocking this one pathway will really be enough to inhibit SAS. ’Shade can affect multiple plant hormones simultaneously or in sequence,’ he says. ’There is an extensive web of interactions between plant hormones where one hormone can affect biosynthesis of another hormone or a group of hormones.’ So interfering with this particular biosynthetic pathway may not be enough to engineer SAS-free plants, he says.

What’s more, manipulating levels of auxin - a hormone with such a fundamental role in all aspects of plant growth - is likely to have lots of unintended consequences, says Kurepin. ’I highly doubt that modification of plant hormone biosynthesis would result in healthy plants capable of resisting the shade avoidance response,’ he says. ’It is a good scientific idea and worth testing, but at this stage it is purely speculative.’