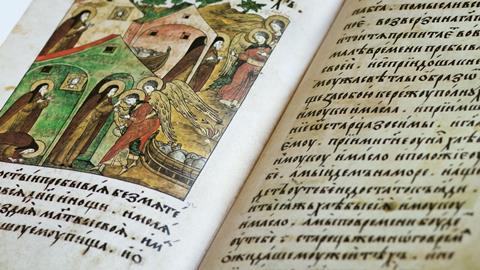 How to preserve ancient manuscripts

Acidity will destroy paper without conservation and careful handling

Libraries and archive collections are an unparalleled resource for our history and culture, containing the wealth of human knowledge and artistic expression. From illuminated medieval manuscripts and historical documents to some of the earliest writings ever recorded, the bulk of material held in most collections is made of paper. However, without conservation and careful handling, paper does not last. One of the most significant challenges to the longevity of paper is acidic degradation, a problem that has been recognised since the early 19th century.

Acidity principally arises from the degradation of cellulose and lignin, and the presence of alum. Although pure cellulose papers – such as linen or cotton rag papers – are generally stable, cellulose can become acidic via oxidative and hydrolytic processes forming bound acids (through conversion of pendant hydroxyl groups), as well as volatile species such as acetic and formic acid. Alum, which is used in some papermaking processes and as alum–rosin sizing to impart specific characteristics to paper, may break down to yield sulfuric acid. Finally, lignin –found in the cheap, mass-produced woodpulp papers first developed in the middle of the 19th century – can also oxidise to form acids (and discolours in the process, causing the typical brown or yellow tones associated with old paper).

Acidity leads to the degradation and scission of the cellulose polymer, resulting in loss of strength and embrittlement which makes items increasingly difficult to handle. Deacidification is a conservation treatment that attempts to mitigate this problem by slowing and limiting the extent of the process. Deacidification on its own cannot reverse existing damage, and as a result there is a limited period in which the treatment can usefully improve the longevity of paper.

There are broadly three processes which can be involved: the neutralisation of bound acid; the removal of mobile acids, such as acetic and formic acid; and the deposition of alkaline material as a reserve to neutralise acids generated in the future. An ideal treatment would encompass all three aspects.

Can acid damage be prevented to begin with?

Preventive measures to limit acid damage are increasingly favoured in many institutions around the world; these allow the greatest number of collection items to be safeguarded in a manner which makes best use of staff and resources. By carefully controlling temperature, humidity, light exposure, air quality and storage conditions, rates of deterioration can be significantly slowed and microenvironments, in which evolved acids might be trapped with collection items, can be avoided.

Nonetheless, there is still an important role for direct deacidification for specific items, and the availability of mass processes, individual treatments and preventive measures provides a suite of options which can be tailored to the specific needs and resources of collections and institutions.

What treatments are used?

Mass deacidification treatments, allowing large numbers of collection items to be processed in a rapid, uniform manner, have been used since the 1930s, when researchers suggested alkaline salts in paper played a role in limiting degradation. Systematic attempts to address the issue began in the 1940s, with William Barrow’s work on the use of aqueous barium hydroxide; this approach was often combined with lamination to strengthen fragile paper (a process which is now deprecated due to its irreversibility). In the 1960s research by Richard Smith led to approaches based on organic solvents, which had the potential to avoid problems with water-induced swelling and distortion of paper, bleeding of inks and softening of adhesives. This led to the introduction of the Wei T’o process in the early 1970s, which is still in use today.

Currently a range of commercial deacidification treatments are available, including include the Wei T’o and Sablé processes, Book Keeper, Papersave and BookSaver; these are largely based on alkaline reagents (typically magnesium salts) in unreactive solvents such as fluorocarbons or siloxanes, although vapour phase and aqueous systems are also found.

Are all manuscripts suitable for mass preservation?

Unfortunately not. All the components of an object must be suitable for the treatment, which excludes coated papers and items with inks or pigments. Items with highly degraded, friable paper or broken bindings are also unsuitable, due to the agitation required to achieve consistent results. As a result, most objects still need individual attention to ensure their suitability for treatment. Furthermore, there are particular problems with many of the individual treatment processes: for example, the Papersave and Sablé processes require books to be dehydrated before treatment, as the agents are water sensitive. Many of the processes also have aesthetic side effects – albeit relatively minor ones – in the form of surface residues, discolouration, texture changes in the paper and leaving a residual odour. There have also been more dramatic problems; in 1986 the Library of Congress and Nasa attempted to use diethylzinc vapour to neutralise acid residues, which resulted in a series of explosions due to the incomplete removal of the extremely air sensitive and flammable treatment agent.

How are individual items treated?

‘Made-to-measure’ treatments can be carried out, for example, by immersing the paper in mildly alkaline aqueous solutions which are designed to remove acids and discoloured ageing products while depositing an alkaline buffer. However, these methods can only carried out after careful assessment of an object’s construction, composition and the presence of fragile, friable or soluble media such as paint or aged inks. These treatments are not reversible, and so are only carried when the benefits of such intervention are demonstrably beneficial to long term preservation and usability.