Scientists at the Roslin Institute in Scotland have laid the foundations for a new method of producing complex biomolecules: getting chickens to lay them in their eggs.

The team led by Helen Sang has genetically transformed hens to produce a mini-antibody, miR24, which is seen as a possible treatment for the skin cancer malignant melanoma. Other hens produced the antiviral compound beta 1a interferon.

Transgenic chickens developed at the Roslin Institute are chimeras containing a mix of modified and normal cells. The gene expressing the molecule of interest is combined with the gene for the main protein found in egg white, ovalbumin, together with the DNA sequence involved in regulating its expression. The sequences are incorporated in a viral vector that is inoculated into the embryo of new laid eggs. 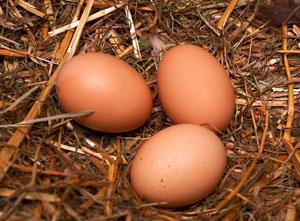 Pharmaceuticals on the farm

At that stage the embryo contains about 60 000 cells and the foreign gene sequence is taken up by five per cent of them, including those of the future ovarian and testicular cells so that the protein can be expressed by future generations.

Roslin director Harry Griffin said the modified ovalbumin gene construct is stable and has been shown to be expressed in the second and third generations. Furthermore, because the protein is only expressed in the cells of the oviduct which manufacture ovalbumin, the process has no systemic effects on the health of the birds, he added.

The concentrations of the foreign proteins found in the egg white varies between the different transgenic chickens but in those producing human interferon it is a typically up to about 50ug/ml of albumin. That is rather lower than the concentration of a human protein alpha-1-antitrypsin (AAT) that Roslin scientists produced in GM sheep milk some years ago. But the amount of interferon needed in treatment is much lower than the daily dose of AAT used to treat blood disorders. ’So the quantities we are producing are within the range of commercial interest,’ said Griffin.

One of the many advantages of chickens over mammal species when used as bioreactors is the short generation time. So although Roslin only has small numbers of modified chickens, scale-up to a commercial sized flock would only take a few months.

Roslin’s collaborators in the project are Oxford Biomedica, which developed the lentivirus vector, and Viragen, which aims to commercialise any products.

Viragen’s managing director Karen Jervis said the process of purifying proteins in egg white is relatively simple and well understood, as vaccines have been made in eggs for more than 30 years. The only problem with albumin is that it is ’gloopy’ and needs to be diluted before the products can be extracted by standard chromatography, she said.