Blocking a key gut enzyme involved in the hunger response can reduce weight gain in mice, say US and Taiwanese researchers. The approach could eventually lead to treatments for obesity in humans that would work by damping down hunger pangs.

The market for obesity drugs is worth over $1 billion (?625 million) a year, with some 300 million potential patients. A current focus for drug developers is synthetic hormones that mimic the actions of gut hormones involved in controlling blood sugar levels. Some have already been approved for use in diabetes.

Philip Cole and colleagues at the Johns Hopkins University in Maryland, University of Cincinnati in Ohio and National Taiwan University in Taipei took a slightly different approach. They based their studies on the hormone ghrelin, also known as ’the hunger hormone’. Ghrelin is normally activated by the enzyme ghrelin O-acyltransferase (Goat), which attaches an eight-carbon fatty acid to one of the hormone’s serine residues to produce acyl-ghrelin. Without Goat, ghrelin can’t trigger hunger. 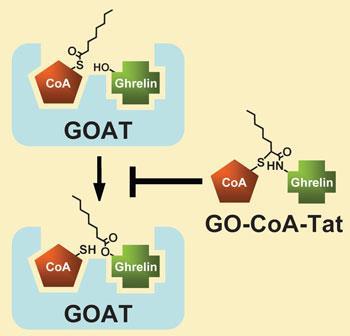 Cole’s team designed a molecule to block Goat. Their compound, GO-CoA-Tat, contains ghrelin residues and octanyl-CoA - bearing the required 8C fatty acid - but the two are cemented together. ’The design of the agent was based on the idea that by linking together the two main substrates of the enzyme we could create a bivalent inhibitor that would bind specifically to this enzyme,’ explains Cole. ’We believe it sits in the sites that the normal substrates would bind to.’

The synthetic molecule reduced weight gain in normal mice, but not in mice that were deficient in the hunger hormone, suggesting the effect was due to a lack of activated ghrelin.

John Wilding, an obesity expert at the University of Liverpool, UK, says the approach looks promising but is still a long way from producing a drug to treat obesity in people. Cole agrees the work is very early stage - his team have yet to refine their compound. But he also says that too little is known currently about the long-term effects of interfering with ghrelin, which is thought to influence growth and may even play a role in memory.

Wilding notes that the research also produced data that could throw further light on the hormone’s function - by showing that insulin secretion is enhanced when GOAT is inactivated. ’This would be consistent with observations that ghrelin might suppress insulin secretion, however this effect is not particularly great,’ says Wilding.