Improving how spent a hydrogen storage material is regenerated makes it a more practical prospect for powering fuel cells. 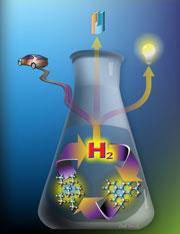 AB contains about 20 per cent hydrogen by weight and can release over two equivalents of molecular hydrogen per molecule. As it does this it forms a polyborazylene (PB) polymer residue. According to Sutton, AB is a good potential hydrogen storage material because it is stable at ambient temperature and doesn’t require external cooling to keep hydrogen in or high temperatures to evolve hydrogen. But for AB to controllably deliver hydrogen and be used commercially it must be regenerated from PB. The University of Oxford’s Martin Jones calls this the ’the most significant problem associated with using ammonia borane as a hydrogen storage material’.

LANL had previously used ortho-benzenedithiol and tin hydride to regenerate AB. However Dow Chemical, LANL’s industrial partners in the US Department of Energy’s Chemical Hydrogen Storage Center of Excellence, found a practical flaw in this approach. ’Pushing large amounts of tin around was going to be quite expensive, because it’s got considerable mass,’ Sutton says. ’That got me thinking about a lighter reducing agent.’

Now, the LANL team and researchers from the University of Alabama show that hydrazine in liquid ammonia can almost quantitatively regenerate AB. The idea is that this regeneration would be centralized and at an industrial scale, not aboard individual vehicles, notes Sutton.

Jones, who has worked with the International Partnership for the Hydrogen Economy, notes that AB is just one of several materials that show ’high promise’ for hydrogen storage. ’Other issues remain, but this certainly places it high on the list of materials that might, in time, find commercial applications,’ he says.

But Sutton is convinced. ’As an initial hydrogen storage material, AB is good,’ Sutton underlines. ’Once you throw in this one-step efficient regeneration, that just adds to its value.’