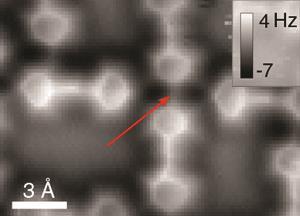 AFM images show a high contrast area, interpreted as a H-bond in other systems, between two nitrogen atoms

Scientists have cast doubt on whether striking atomic force microscopy (AFM) images previously thought to show hydrogen bonds are real or merely an artefact. The interpretation has been called into question because a similar feature appears between nitrogen atoms that do not hydrogen bond to each other. ‘It’s not possible to rule out that some signal might come from the hydrogen bond, but you can also get this contrast without them,’ says Peter Liljeroth from Aalto University, Finland, one of the authors of the new work.

Liljeroth and his team member Sampsa Hämäläinen saw similarly strange discrepancies between bond lengths measured by AFM and other techniques in graphene. After exploring these observations in simulations, they also looked at molecular systems in the same way. Surprisingly, given they hadn’t put them into their simulation, they saw what looked like hydrogen bonds.1

At around that time a team including Xiaohui Qiu at the National Centre for Nanoscience and Technology in Beijing, China, published AFM images apparently showing hydrogen bonds between quinolones. Qiu emphasises that his team immediately called for better understanding of how the carbon monoxide tip created the contrast attributed to hydrogen bonds.

Liljeroth and Hämäläinen also simulated this system, finding that ‘although the intermolecular contrast might be because of hydrogen bonds you don’t need them’. To explore the phenomenon further, their collaborators in Ingmar Swart’s team at Utrecht University, the Netherlands, consequently studied a bis(para-pyridyl)acetylene tetramer by AFM. Although the tetramer is held together by hydrogen bonds, at its centre two pyridinic nitrogens face each other with no bonding interaction. However, a line does appear between them in AFM images.

Philip Moriarty from the University of Nottingham calls using a system with both hydrogen-bonded and non-hydrogen-bonded parts ‘very clever’. ‘It means that they have their “control” built-in,’ he says.

Leaning towards an explanation

Carbon-monoxide tip AFM images generally represent the repulsive force the tip experiences, which is proportional to the total electron density of the sample, Liljeroth explains. ‘There’s very little electron density on hydrogen bonds, so it’s not clear why you should see them,’ he says.

The team’s latest findings suggest the narrow high-contrast lines between molecules aren’t high electron density areas. Instead, they’re ridges in the ‘interaction potential’ – the force the carbon monoxide tip and the molecules exert on each other. When the tip is either side of the ridge it tilts away, reducing the force it registers. That enhances contrast along the ridge compared to the regions on each side.

Qiu is uncertain if this is really the explanation. ‘If so, we should “see” lines between oxygen and nitrogen atoms in our study on 8-hydroxyquinoline,’ he comments. ‘The key debate is whether the lines can be explained as solely two atoms getting closer, or is there charge accumulation in-between and the tilting carbon monoxide just sharpens the contrast. Apparently the former statement is not true in our system.’

However, Moriarty highlights that Liljeroth and Swart’s team are not the first to say this tip-tilting plays the major role in creating ‘hydrogen bond’ lines in AFM images. Earlier this year, scientists in the Czech Republic and Germany published simulations also demonstrating that interaction potentials produce the contrast seen.2 By adding ‘very high quality’ experimental data, the new paper makes a ‘compelling’ case, Moriarty adds. ‘It’s a key example of how scanning probe microscopists have to be exceptionally careful in interpreting their images.’