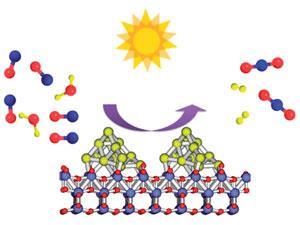 Scientists from Spain have found a catalyst that can use sunlight to power an important industrial reaction for the production of hydrogen at ambient temperatures.

Hydrogen is a clean and efficient alternative energy carrier to fossil fuels. However, as hydrogen does not typically exist by itself in nature, it must be released from compounds that contain it.

Most hydrogen is produced by the steam reforming reaction. Methane reacts with steam at high temperatures to produce hydrogen (H2), carbon monoxide (CO) and some carbon dioxide (CO2). In a subsequent reaction, called the water–gas shift (WGS) reaction, CO and steam react further to produce CO2 and more H2. This step requires temperatures around 350°C and either an iron oxide-based or a copper-based catalyst.

By testing many different materials, Hermenegildo García, and co-workers at the Polytechnic University of Valencia have now found that gold nanoparticles supported on titanium dioxide can effectively catalyse the WGS reaction using visible light irradiation.

Alexis Bell, an expert in catalysis at the University of California Berkeley, US, says the work is intriguing as it represents the first evidence for photon-driven WGS chemistry. ‘While the mechanism by which this process occurs remains unclear, the phenomenon is real,’ Bell adds.

Leading figure in photocatalytic hydrogen production, Wonyong Choi, from Pohang University of Science and Technology, South Korea, is also enthused by the work. ‘The authors demonstrate that a classical reaction of industrial importance can be carried out in a non-classical way – using solar light!’

García points out that although this work is significant, better photocatalytic efficiencies are needed to compete with current industrial process. The group are now working on this. ‘The major goal is to be competitive with current technologies, and the challenge is an affordable price for hydrogen production based on photocatalysis’ says García. He is optimistic that this is not far away.