Scientists in Germany say they have settled an argument over how hydroxide ions travel quite so quickly through water, after finding evidence that they can donate a weak hydrogen bond.

Despite the common role of hydroxide in chemical and biological processes, its interactions with water are poorly understood. Confirming the ion’s solvation behaviour should have wide-reaching implications in studying aqueous chemistry, the German team say.

Hydroxide ions are known to migrate quickly through water, but scientists disagree about the solvation state that enables this rapid transport. The classical approach treats hydroxide ions like water with a missing proton - it assumes that hydroxide ions behave like ’proton holes’, unable to donate a hydrogen bond. But recent theoretical work has suggested that hydroxide ions should instead be considered as a distinct species that forms unique and rapidly-changing complexes with water. 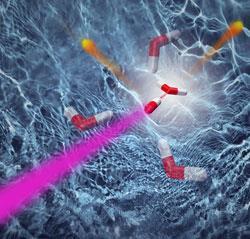 Now, a team led by Bernd Winter at BESSY, the synchrotron facility in Berlin, have confirmed that the second theory must be correct. Winter showed that, unlike a proton, the hydrogen atom of the hydroxide ion can form a weak hydrogen donor bond to a nearby water molecule.

Hydroxide ions are known to accept up to four hydrogen bonds from neighbouring water molecules through the oxygen of the hydroxide - but finding evidence that they can also donate a hydrogen bond has been more difficult.

To settle the argument, the team used an electron spectroscopy technique that is sensitive enough to distinguish between hydrogen bonds that are donated and accepted. The technique works by probing the local electronic structure of molecules in hydroxide aqueous solutions - detecting energy transfers that occur in extremely short time frames of around 6 femtoseconds.

’Our studies revealed a peculiar energy transfer mechanism that has never been observed before in an aqueous system,’ Winter told Chemistry World, noting that this indicates the presence of the weak bonds.

’This is the first direct evidence of the local solvation state of hydroxide,’ says Mark Tuckerman, who investigates the molecular dynamics of water systems at New York University, US. ’I don’t know if this settles the argument for certain, but it is very compelling evidence.’

’This work adds important details regarding the solvation, mobility and electron dynamics of the aqueous hydroxide ion,’ says Richard Saykally at the University of California at Berkeley, US. ’If these results stand up to further scrutiny, they will represent a qualitative advance in our understanding.’