An innovative book that has built-in links to online multimedia content has made its debut at the American Chemical Society meeting here in San Francisco.

The book is littered with barcodes that can be read by a wireless laser pen. A quick scan can trigger a computer to run related videos of practical demonstrations or molecular animations. Dubbed ChemgaBook, the tome is intended to be a teaching aid whose additional content can be continually updated by the publisher. 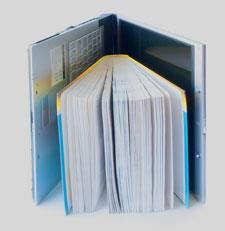 Since computers became part of our everyday lives, many commentators have predicted that books will die out. ’But people like to work with books,’ said Deplanque. ’Reading on a computer is like swimming in an aquarium.’

He points out than people rarely read entire books online. Instead, they tend to simply print out large swathes of text to read at their convenience. ’So we’ve exchanged beautiful books for badly-printed A4 sheets,’ he said.

His aim is to link the power of a computer with the ease and accessibility of the printed book. Fiz Chemie’s prototype chemistry textbook can link to material stored on a publisher’s server, or to a DVD supplied with the tome. The content can easily be updated to ensure that the book refers to the very latest science, Deplanque added.

The company is looking for partners to go into full production. ’Most publishers we’ve talked to like it very much,’ said Deplanque, who adds that both lecturers and students have shown interest in the book at the meeting.

Deplanque hopes that the first commercial books, covering a wide range of scientific topics, will hit the market next year.