A common painkiller could be used to treat prostate cancer

Scientists in the UK have moved a step closer to understanding how ibuprofen could help treat cancer. The findings could lead to the drug being used as a preventative treatment for prostate cancer, in the future.

Ibuprofen - a common painkiller - can help reduce the risk of prostate cancer, but the mechanism by which it inhibits tumour cells is still not fully understood. Now, Matthew Lloyd and his team from the University of Bath in the UK, in collaboration with Cancer Research UK, have uncovered a mechanism suggesting that the chiral inversion of ibuprofen inhibits the activity of the protein alpha-methylacyl-CoA racemase (AMACR), levels of which are increased in the presence of prostate, some colon and other cancers.

Lloyd explains that AMACR catalyses the chiral inversion of 2-methyl-fatty acyl-CoA esters, which are thought to be related to tumour cell growth. ’We would like to produce a chemical that binds really tightly to the protein [AMACR] and stops it working, because that would be a potential treatment for prostate cancer,’ he says. 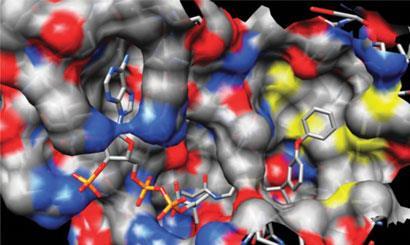 Ibuprofen’s R-enantiomer binding to the protein AMACR, which converts it into the active S-enantiomer

First they converted a racemic mixture of ibuprofen into its coenzyme A ester to make a substrate for the AMACR to bind to. They then observed that the R-enantiomer of the ibuprofen-CoA ester bound tightly to the AMACR, resulting in 50 per cent being converted to the S-enantiomer - this involves removal of the R-ibuprofen alpha-proton followed by non-selective reprotonation.

The cycle was repeated, so that you end up with a net conversion of R to S. Lloyd explains that the significance of the finding is that while AMACR is doing the chiral conversion of ibuprofen, it is not able to promote cancer growth. In addition, the net conversion of R-ibuprofen to the active S-ibuprofen means that all of the drug can be used for its inflammatory effect.

’The fact that the AMACR is able to convert the R-ibuprofen into S-ibuprofen is not new, but it has never really been demonstrated before that this is a general phenomenon that applies to several of the drugs in the same class,’ says Aurelie Courtin, a drug development expert at the University of Cambridge, UK. However, she indicates that at present ibuprofen cannot be used as a preventative treatment for cancer. ’Further experiments are needed to prove its anticancer effect; in vitro first on different cancer cell models and then in vivo. Furthermore, as it would be a long term treatment, it is important to study its toxicity - mainly on the liver - and its side effects,’ she adds.

Lloyd agrees that ibuprofen should not be seen as a wonder drug just yet. ’There is still a long way to go and further work is definitely needed,’ he says.

-methylacyl-CoA racemase 1A (P504S)?a potential mechanism for the anti-cancer effects of ibuprofen