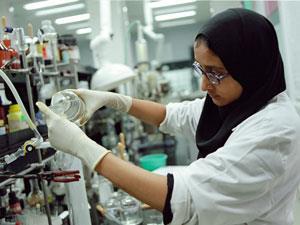 Researchers in India are increasingly authoring articles published in ‘high-quality scientific publications’ despite continued stagnation in Indian government spending for research, according to a new Nature Index analytics report.

In 2014, India ranked 13th globally in the number of papers published in top journals, with a ‘weighted fractional count’ of 921.8 articles, up nearly 8% from 2012. Noting that India has a ‘historic love affair with chemistry’, the report says half of India’s index rating comes from chemistry papers.

The Nature Index, launched in 2014 by the Nature Publishing Group, tracks articles published in 68 ‘superior science journals’ and gives a lesser weighting to articles in specialist astronomy and astrophysics journals because they publish so many articles.

The growth in India’s publication output has come despite India’s unenviable research spending, which has hovered around only 1% of GDP for the past two decades, the report says. India showed the strongest publication growth rate compared with other nations with similar ‘output and broadly similar economic backgrounds’, including Brazil, Russia, Taiwan, Singapore, Australia, Italy and South Korea.

While Australia, Singapore and South Korea spend higher proportions of their GDP on science, the report states that India’s weighted publication rate ‘far surpasses that of Singapore, draws level with Australia and is closing the gap with South Korea’.

In 2014, Indian researchers co-authored papers with researchers from 85 nations, according to the report, with the biggest share of collaborations coming from researchers based in the US followed by Germany in a distant second place. The index indicates that although Indian researchers have ‘good collaborative ties with international corporations’, those with domestic firms are weak.

C N R Rao, honorary president and Linus Pauling research professor at Jawaharlal Nehru Centre for Advanced Scientific Research in Bangalore, tells Chemistry World that cuts to India’s research spending last year were severe. ‘We are starved for funding,’ he says. ‘Unless there is improved funding, Indian institutions cannot be in the forefront of research. We need to have a few institutions which have infrastructure comparable to the best ones in US or Europe.’

Uday Maitra, of the department of organic chemistry at the Indian Institute of Science in Bangalore, says spending cuts are creating difficulties. Indian science ‘in general and chemistry in particular need more funds’, he says. One major problem that regularly dogs science in India is the lack of money to maintain expensive equipment after initial funding dries up. ‘The funding agencies need to seriously worry about this problem,’ he says.

The report says that ‘India’s biggest strengths are the quality of its most elite scientific institutions’, adding that in chemistry India’s top institutions ‘stand up to be counted among the world’s top ranks’. The Indian Institutes of Technology (IITs) rank 24th globally in 2014 on a weighted basis in chemistry, compared with the University of Cambridge in the UK at 20th and Osaka University in Japan at 25th. India’s Council of Scientific and Industrial Research (CSIR) is 30th. On a weighted basis, India ranks ninth globally in chemistry. ‘There is little doubt that of all the subjects, India seems to be doing best in chemistry and materials science,’ Rao says.

Rao describes the index as ‘quite good and useful’, but says it needs to be ‘normalised with respect to the size of institutions’. For example, he says his Jawaharlal Nehru Centre, which ranks 304th in chemistry on the index, is based at one location with only 50 faculty members and 250 PhD students. But both the Indian Institutes of Technology and Council of Scientific and Industrial Research are spread out over India with much bigger faculties. ‘All IIT’s put together or all of CSIR as one unit gives erroneous results,’ he argues.

Maitra expects Indian chemistry to become even stronger in the near-term, noting that several new institutions under the umbrellas of the IIT and the Indian Institute of Science Education and Research have added chemistry programmes and have ‘excellent young faculty’. He adds: ‘Many of these young chemists are working in areas of chemistry which interface with materials science and with biology, and clearly these are areas which have the potential to evolve rapidly in the next few years.’