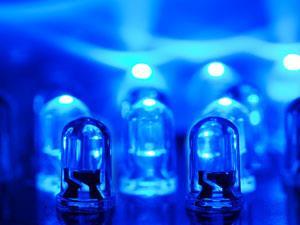 Light emitting diodes (LEDs) are pretty ubiquitous these days, from remote controls and blinking electronic devices to low energy light fittings. But while LEDs might be taken for granted, precisely how and why they work is still something of a mystery and the subject of continuing scientific debate.

Indium gallium nitride LEDs emit blue or green light, but the reason that they do this so efficiently has been argued in the literature for years. The established theory was that clusters of indium alter the band gap of the material, creating quantum wells that allow electrons and holes to recombine and emit light while avoiding quenching. However, back in 2003, Cambridge researchers, led by Colin Humphreys, suggested that the clusters previously measured in InGaN were not essential for the material to emit light. Perhaps, they suggested, the clusters were an artifact created by the beam of the electron microscope.1 The suggestion threw the established literature into doubt and provoked robust discussion that continues to this day.

‘The reason why InGaN layers are highly luminescent is still an open question,’ says Silvja Gradecak, from the Massachusetts Institute of Technology in the US and author of the latest work questioning the necessity of indium clusters for efficient LEDs. ‘Since indium clustering was relatively widely accepted there were not so many efforts to establish alternative theories.’

Gradecak has been working on these materials since her PhD and has now set up a collaboration between her group and Brookhaven National Laboratory in New York. With access to the powerful microscopes at Brookhaven, Gradecak decided to have another look at InGaN – in fact the same sample of InGaN that Humphreys’ team worked with in 2003.

The first task was to confirm that electron microscopy could introduce clustering in InGaN. ‘We typically use high energy electrons, around 200kV,’ explains Gradecak. When using a beam of this strength, the team saw clustering but when the energy of the beam was reduced by 60%, no clustering was observed. Further analysis confirmed that the material didn’t contain clusters of indium atoms, but the Cambridge sample still showed luminescence.2 For Gradecak, this means that indium clustering isn’t needed for luminescence, but in such a contested area it is perhaps unsurprising that not everyone agrees.

Christian Kisielowski of the Lawrence Berkeley National Laboratory, US, is one of the scientists that first proposed the indium clustering theory and describes the continued controversy as ‘an unfortunate debate that entertained the community for much too many years’. Kisielowski says he has shown repeatedly, using different techniques, that clustering exists and characterises opposing papers as limited by various aspects such as sample preparation and sample thickness.

Humphreys is much more complimentary of Gradecak’s work. ‘Nearly all the GaN community now agree that such indium-rich clusters do not exist in InGaN alloys, but a few high-profile international scientists have continued to state that these indium-rich clusters are real,’ he says. ‘It is my belief that this excellent paper will put an end to this long-standing debate.’ While Humphreys was happy to provide a sample to Gradecak’s group, Kisielowski, who was also contacted, did not supply a sample for comparison.

But Gradecak is clear that she has shown that clustering isn’t present in the sample tested, which is not to say, she adds, that clustering doesn’t exist in some InGaN materials. Of course this poses the question of why InGaN semiconductors emit light without quenching. One of the puzzles Gradecak says she hopes to crack is whether or not inducing clustering improves luminescence.