Pharmaceutical companies have slashed their support for PhD students and postdocs at UK universities as a result of changes to the way research costs are calculated. 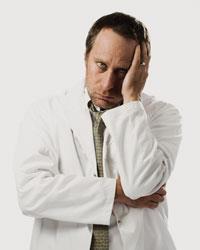 A survey by the Association of the British Pharmaceutical Industry (ABPI) showed a drop of nearly 25 per cent in the number of postdoctoral grants funded by member companies at British universities between 2003 and 2007. Over the same period, the numbers of PhD studentships fell by almost 14 per cent. ’While the industry continues to work closely with universities, there is a worrying decline in the level of activity,’ says Philip Wright, the association’s director of science and technology.

The ABPI suggests that three related factors may be responsible for the change - escalating costs, increasingly complex contract negotiations and issues of intellectual property ownership. But representatives on both sides agree that the key factor has been the introduction of full economic costing (FEC) arrangements.

FEC has been introduced to the university system over the past two years by the government and research councils to help research institutions recover indirect costs of sponsored projects - academic staff time, use of research facilities, building rental and support services. The concept has also been applied by universities to industry sponsored research.

’In one sense, FEC has had a good effect - it has made universities better understand their cost base,’ says David Hollinshead, associate director for R&D and science policy with AstraZeneca. ’But they haven’t reached agreement on how they apply it. Different universities are charging anything from 10 to 120 per cent of the basic contract for postdoctoral grants, and so in many cases companies are deciding that they can get this research done elsewhere.’

Currently, FEC only applies to postdoctoral grants, which explains the greater reduction in their funding. Hollinshead says that ’our biggest concern would be if they started to apply FEC to PhD studentships - and it has been talked about. That would inevitably cause us to look again at what we are doing’.

Peter McNaughton, head of the department of pharmacology at the University of Cambridge, says the administrative changes are ’irreversible’.

’Universities have become a lot more hard-nosed and legalistic over the past five years,’ McNaughton adds.

He believes that the decline in industry sponsorship is being offset by strong growth in the numbers of foreign postgraduates coming to UK universities - particularly from China.