Inert nanoshells succumb to iron will 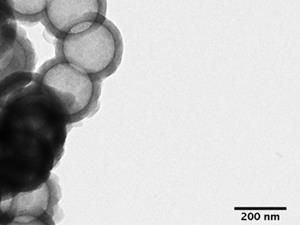 US chemists have made silica nanoshells susceptible to breakdown by proteins in our bodies, which should make them safer for drug delivery and medical imaging applications.

William Trogler and and colleagues at the University of California, San Diego (UCSD) doped nanoshells with iron, which can be absorbed by proteins like transferrin in blood serum. ‘The idea was that living systems would take this iron out of its sites in the silica nanoparticle and the structure would fall apart,’ Trogler tells Chemistry World. He hopes that this will enhance the chances that a real-time ultrasound tumour imaging technique being developed by his co-author Andrew Kummel and UCSD surgeon Sarah Blair will be approved for use.

Inert silica is non-toxic, meaning hollow and porous nanoshells could become containers for drugs or absorptive materials for imaging. But that stability also allows it to build up, potentially causing harmful effects such as the lung disease silicosis. ‘The immune system tries to break it down, but can’t,’ Trogler says. ‘The chronic immune system irritation causes the toxic response. For biomedical applications you would worry about it getting into the circulatory system.’

Trogler’s team created nanoshells around a polystyrene bead template using iron and silicon alkoxide precursors. After removing the inner bead by dissolution and thermal decomposition, they put iron-doped and undoped nanoshells in solutions of iron-chelating molecules in human serum and serum from calf foetuses. Iron-doped nanoshells degraded in a few days at 80°C, to the point that to the point that no silica could be isolated by centrifugation. In serum at body temperature a similar stage was reached in weeks, while undoped shells did not degrade.

Qian-Jun He, from the Shanghai Institute of Ceramics, Chinese Academy of Sciences, wants more data showing that iron is definitely doped into the nanoshells, and that the silica is sufficiently degraded. Nevertheless, He, who is part of a team that produced fast-degradation silica nanoshells through calcium doping, calls iron-mediated breakdown ‘valuable’. Siddharth Patwardhan from the University of Strathclyde, UK, who has studied silica dissolution and precipitation, agrees. ‘Although the fate of silica and iron released and their chemical and physical form is not clear, further research will produce potentially important biodegradable materials,’ he says.

Trogler responds that his team’s results show the degraded silica is essentially soluble. ‘The real issue is: Does the silica clear from tissues in an animal model?’ he says. ‘Experiments are in progress to track silica after injection to show that iron doping promotes effective biodegradation in vivo.’

Blair and Kummel hope this will aid their ongoing research using nanoshells as ultrasound imaging agents to mark tumours for surgical removal. ‘Before breast cancer operations surgeons have to use x-ray imaging to guide wire insertions showing where to cut,’ Trogler says. ‘That’s uncomfortable and the wires can move, but they can’t yet do real-time imaging in the operating room. We’ve shown that injecting just 50µl of perfluorocarbon gas-filled shells gives good real-time images in Doppler ultrasound.’