Nature’s masters of disguise, the cephalopods, inspire inexpensive and disposable stealth coating that could easily be added to military kit 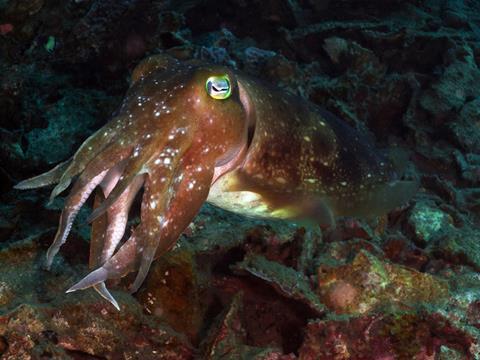 US scientists have developed an adhesive tape that can help objects match the infrared reflectance of their surroundings and disguise them from being seen by infrared cameras. The flexible coating – based on a protein found in cephalopod skin – can moderate reflectance simply by stretching and may find application in military camouflage kit.

Cephalopods – such as squid, octopuses and cuttlefish – are nature’s masters of disguise. Their skins contain iridophores, cells that reflect and manipulate incident light to spectacular effect. Their plasma membranes fold to encompass lamellar-like platelets containing reflectin. Reversible phosphorylation of reflectin changes the size and structure of the lamellae, changing the iridophore’s reflectance across the visible spectrum.

Alon Gorodetsky’s group at the University of California, Irvine, has developed a method for coating a thin-film of reflectin onto the surface of a flexible and transparent adhesive substrate layered with graphene oxide. These ‘stickers’, transparent under normal light, can be stuck onto any surface, including conventional camouflage with precise patterning. The reflectance can be controlled by stretching, and upon heating, the inexpensive material returns to its original state. ‘The protocols for making it are very scalable – putting a thin film on a standard roll of tape isn’t difficult and requires fairly little material so it shouldn’t be much more expensive than ordinary sticky tape one finds in their desk,’ Alon tells Chemistry World. 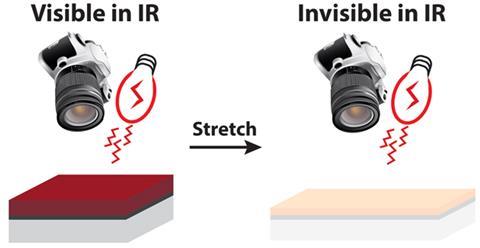 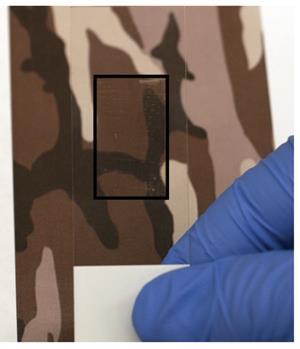 The coating is transparent so underlying camouflage patterns are clearly visible

Besides stealth applications, Gorodetsky suggests that advanced versions of these materials might be used in glass coatings to regulate seasonal temperature. The team are keen to push the reflectance of reflectin-inspired materials as far as possible into the thermal infrared. ‘We hope to eventually develop autonomous clothing-integrated devices that will regulate how a person radiatively exchanges heat with their environment.’ The potential applications are exciting: ‘Wouldn’t it be neat if you had a jacket which could adapt to keep you cool on warm days and warm on cold days?’ adds Gorodetsky.

Jason Slinker, an optoelectronic materials expert at the University of Texas at Dallas, US, says the material should draw great interest from the apparel industry. ‘Such a stable, reversible, responsive, and inexpensive means of enhancing clothing with broad color changing capabilities will have applications in safety and camouflage as well as aesthetic implications in fashion.’