Inhaled nanoparticles, from there to where?

US scientists have for the first time shown how the size and surface properties of nanoparticles can affect where they end up in the body after they are inhaled. Their findings could have implications for nano regulation and drug development.

Akira Tsuda at the Harvard School of Public Health in Massachusetts became interested in how environmental nanoparticles, like those generated from combustion and industry, are absorbed and processed by the body. He teamed up with John Frangioni at the Beth Israel Deaconess Medical Center in Massachusetts to use advanced imaging technology to help shed some light on the journey of such nanoparticles. 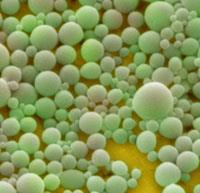 The scientists made a variety of fluorescent nanoparticles of different sizes and compositions. They then administered the nanoparticles to the lungs of rats and used real-time fluorescence imaging to track how the particles were absorbed, moved around the body and then cleared in the hour after they were delivered.

Frangioni and Tsuda think that their work will help several fields. Frangioni explains that they hope that ’drug companies will use these data to think about new formulations that will be more effective,’ by tailoring the properties of the nanoparticles they use to where they want them to go.

Tsuda also hopes that the work will help environmental monitoring and legislation, but Ken Donaldson, an expert in nanoparticle related lung disease at the University of Edinburgh, UK is not so sure. Donaldson explains that most soot particles are at the top end of the range investigated by Tsuda and Frangioni, but tend to exist as larger aggregates. ’This might be quite important for nanomedical people,’ he says ’but it’s less clear what the environmental implications are.’

’This work is the start not the finish,’ says Frangioni, ’we’re just hopeful that others will try and replicate the results and use it to move several fields along in parallel.’