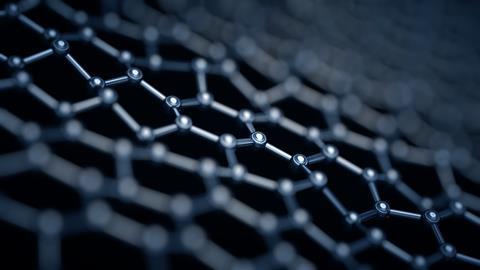 Scientists in India have made graphene field-effect transistors that work for over 10 months with some help from discrete inorganic structures. The approach has led them to produce a graphene logic inverter that is stable in ambient conditions.

Conventional electronics tend to be silicon based, due to the ease of doping silicon with either electrons or holes. These two forms of silicon, n- and p-type, are the building blocks of electronic devices. However, it isn’t possible to make silicon electronics on the nanoscale, so many researchers are turning to materials like graphene.

The lanthanide-macrocyclic complexes exhibit strong C-H–π interactions with graphene, leading to a sharp and stable negative shift in the Dirac point

But replicating the electronic success of silicon with 2D materials has proven difficult. Pristine graphene field-effect transistors tend to be p-type and previous attempts to make n-type graphene have used organic dopants. According to Chandramouli Subramaniam, from the Indian Institute of Technology (IIT) Bombay, the instability of organic dopants in ambient conditions creates graphene field-effect transistors with ‘unreliable and irreversible transfer characteristics.’

The devices are stable for 7200 hours, an unprecedented length of time that stems from C-H–π interactions. Previous work had used the π–π interactions that arise from graphene’s delocalised structure to tune its electrical properties, but in this case, Subramaniam and Shanmugam have purposely suppressed these interactions. Their system hinges on C-H–π interactions between the graphene and lanthanide dopants. The binding energy between the dopant and graphene is much larger than previous systems, and correlates directly to the stability of the graphene field-effect transistor.

Jingbo Li, an expert on graphene field-effect transistors from the Chinese Academy of Sciences in Beijing, says this study ‘may inspire [the use of] more fundamental supramolecular interactions in tuning the electrical properties of two-dimensional materials.’

Aside from the stability, other properties of the system are also impressive. The researchers report a voltage gain of 0.275 – Subramaniam explains that this is ‘higher than other reports that utilise bottom gate electrodes [but] lower than reports that utilise top-gate electrodes.’ And the device’s power dissipation of 30μW is the ‘lowest compared to several other related systems’.

Looking to the future, the group will use their new method to improve voltage gain with top-gated structures and p-dopants, and hope it accelerates molecular electronics into real devices.