On 1 October 2009, Andrew Hamilton, current provost of Yale, will start his term as the University of Oxford’s new vice chancellor. But anyone that thinks his new duties will keep Hamilton away from the lab should think again.

’At heart, I’m a synthetic organic chemist,’ he says. ’I - like many of my colleagues - began my career due to my love of research and teaching, so when I became more and more involved with administration it was very important for me to keep research momentum going. I try to spend a part of every day in the lab - often in the morning and evening - but my students and postdocs have got used to that.’ 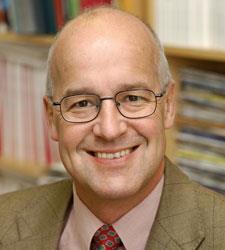 Andrew Hamilton is still a synthetic organic chemist at heart

Recently, Hamilton and his team at Yale have focused on making synthetic molecules that imitate the structure of binding domains on a protein’s surface. Protein-protein interactions play an important role in signalling inside cells, ’so if one can design small molecule mimics of these interfacial domains they become a possible route to disrupting protein-protein interactions in a disease state in a living cell,’ he explains.

That’s often involved finding ways to block signalling pathways implicated in cancer, though Hamilton’s lab is also looking at parasitic diseases. ’We have had some real success in recent months and years in discovering molecules that can reverse malarial or Chagas infection in both cellular and, in some cases, animal models of the disease,’ he says.

Maintaining an active research lab remains a priority for Hamilton. ’It gives me an outlet for my scientific interests and helps me keep my sanity in the complex world of university administration,’ he says. ’Most importantly it allows me to fully understand the pressures that all university faculty are under.

’I’m very much looking forward to moving my research activities to the chemistry department at Oxford and hopefully beginning some new collaborations there,’ he adds.

Hamilton has spent nearly 30 years working in the US. After studying chemistry at the University of Exeter, he moved to the University of Cambridge, completing his PhD there in 1980. In 1981, he was appointed assistant professor of chemistry at Princeton University in New Jersey, US, next moving to the University of Pittsburgh in 1988 and finally joining Yale - the Ivy League institute based in New Haven, Connecticut - in 1997. Hamilton headed up Yale’s chemistry department before becoming deputy provost for science and technology, then provost in 2004 - US equivalent to a UK university’s pro-vice chancellor.

As well as managing Yale’s $2.8 billion (?1.4 billion) operating budget, Hamilton was responsible for the university’s 2007 acquisition of the former US R&D centre of Bayer Healthcare, the pharmaceutical arm of the Germany-based chemicals giant, for around $109 million. The 550,000 square feet of state-of-the-art lab space, plus lecture theatres and offices, are to be part of the new ’West Campus’ - based in the towns of West Haven and Orange - which nearly doubles the university’s size.

’It’s very exciting,’ Hamilton says. ’The president of Yale teased me because when we first went around to look at the labs, I began to salivate because of the fume hoods. The president is an economist so couldn’t quite understand the attraction that fume hoods offer to an organic chemist like me.’

When Hamilton returns to the UK as Oxford’s vice-chancellor, fundraising will be a key issue.

The university launched a well-publicised drive in May 2008 to raise ?1.25 billion, and it holds ?3.4 billion in endowments. But that pales in comparison to Yale’s endowment, which stands at over $22.5 billion (?11.3 billion) - second only to that of Harvard. So why have US universities been so successful at building up their endowments? And why have their UK counterparts lagged behind?

’One can say that the engagement of alumni in American universities is extremely well done, extremely effective,’ says Hamilton. ’The percentage of students who make donations to the university later in life is very high.’

Secondly, Yale’s endowment has gone up by around a fifth each year since 2004, and increased 28 per cent in 2007. That’s thanks to a team who have managed it ’magnificently’, says Hamilton. ’Yale has one of the best investment leadership teams in the world for large endowments. It’s effectively stewarded and has brought back very significant annual increases as a result of that wise and careful stewardship.’

Hamilton declined to comment on the lessons Oxford could learn from Yale’s fundraising successes. ’I can only talk about Yale, that’s the institution I know most about at the present time,’ he says. ’I’m looking forward to become involved in the future in fundraising for Oxford and working very closely with the colleges. I think the loyalty of Oxford alumni is as deep as that of Yale alumni.’

Hamilton won’t be the first Yale provost to go on to head up a top university. His predecessor, neuroscientist Susan Hockfield, is now president of the Massachusetts Institute of Technology. And, in the UK, Alison Richard was Yale’s provost for nearly nine years before becoming the University of Cambridge’s vice-chancellor in 2003.