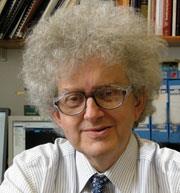 Martyn Poliakoff, CBE, FRS, is research professor of chemistry at the University of Nottingham in the UK. His main research interest is the application of supercritical fluids with a focus on green and sustainable chemistry. He is one of the narrators of ’The Periodic Table of Videos’, which are popular on YouTube.

I’m an Honorary Professor at Moscow State University, something I share with Fidel Castro and Bill Clinton.

Which of your academic achievements are you most proud of?

To me, academic work is rather like journalism - journalists get excited about the story they are working on, but when they move on to the next story, that one is more exciting than the one before. So I think that the only way you can operate as an academic is to be excited about whatever you are doing at a particular time. When I was younger, I did a lot of work on the reactive molecule iron tetracarbonyl, which is completely useless in the green chemistry context because it only exists at room temperature for a millionth of a second or less , but I am still quite proud of my experiments. As a professor, I am proud of the little contributions I can make to the design of an experiment by my research group. Experiments are almost always done by my students or postdocs. Sometimes, as a supervisor, the contributions to the design of the experiments are not as big as one would like. Occasionally, I have a really good idea , which makes the experiments work and that always give me pleasure.

You’re keen to promote science on YouTube. Could you tell us more?

I began working with YouTube purely by accident. My university was collaborating with Brady Haran, a very talented video journalist, who wanted to make a periodic table of videos. I didn’t think there was enough to say about some of the more obscure elements but as it turned out, there was plenty to say, at least enough to make short videos. We wanted to show that we enjoy chemistry and how much fun it can be.

We’re in the process of making videos about different molecules and reactions. There are also other videos that are rather difficult to define, for example, we made a video of gold dissolving in Aqua Regia - a mixture of nitric acid and hydrochloric acid - it’s not exactly a reaction or a molecule but we thought that people may be interested in seeing the gold dissolving.

Which video was the most fun to make?

They were all fun, but my favourite is about the element hassium. This is element 108 and I knew nothing about it. In fact, in the precredit sequence - the bit before the main title of the video - I was filmed saying ’I don’t know anything about hassium, let’s make something up’.

What is your favourite element?

I’m very fond of sodium. The chemical symbol for sodium is Na, which was my mother’s nickname when she was a child. Each time I hear the word Na or see it written down, I get a warm feeling. I’m also fond of xenon, because it’s been an important element in my research.

What excites you about chemistry and what does the future hold for green chemistry?

Objects we use in everyday life, such as most of the clothes we wear, are made from synthetic chemicals. The jacket I’m wearing is actually leather but the inside is made of polyester - a synthetic material. We couldn’t enjoy any of these without the products of the chemical industry. Chemistry often has a bad image. People generally think about it polluting and destroying the planet but green chemistry allows young people to feel that they are helping both the planet and humanity at the same time. So it’s doubly good!

With oil running out and the expanding world population leading to a greater demand for chemicals, we have got to do something. One of the greatest challenges is to get green chemistry to work. The future either holds success in delivering what people need or complete failure leading to society collapsing. We have to succeed. I hope that in the end the principles of green chemistry will be applied to most chemistry. You could argue that if green chemistry really succeeds, it will disappear because all chemistry will become green.

Which historical scientific figure would you most like to have dinner with and why?

I have been fortunate to have met many fascinating famous scientists. One of the exciting things is actually finding out what they are like as people and not just learning about what they have discovered. However, historical figures come from a very different age. Possibly, they would strike us as being pompous or very formal compared to nowadays, not because they were famous scientists but because they lived 100 or 200 years ago. From my point of view, there are two quite exciting events that happened in 1869. One was Mendeleev propounding the Periodic Table for the first time. The other was that Thomas Andrews, a physical chemist in Belfast, described the critical point of carbon dioxide for the first time. Supercritical fluids have played a very important part in my research. It’s quite amusing that the two events took place in the same year. I would quite like to have dinner with Thomas Andrews and Mendeleev, though of course, they might not have been able to speak to each other because I am not sure whether Mendeleev could speak English. He definitely spoke German because he published some of his papers in German. It probably would be a rather strange triangular conversation.

How would your family and friends describe you?

When you got your CBE, how was your meeting with the Royal Family?

A CBE is a British Award, which stands for Commander of the Order of the British Empire. It is presented at Buckingham Palace by a member of the Royal Family. I met with Prince Charles and he was very interested in my work. We had a 45 second discussion about recycling plastics, which was quite unexpected. He really had done his homework!

You already have a number of fans; you even have a Martyn Poliakoff appreciation society on Facebook. How do you feel about being famous and how do you deal with fame?

I’m not sure that I’m particularly famous. My brother is a well known playwright in the UK and much better known than me. Ten years ago I was walking through Helsinki with a friend of mine, who is very well known in Finland. I was with him and my postdoc who asked, ’Have you noticed that everybody is looking at Neil?’ I replied ’No’, because I am used to people staring at my hair anyway. So I didn’t notice anything different.