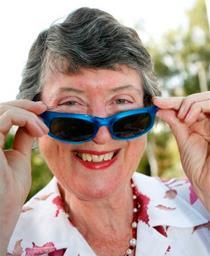 Mary Norval is Professor Emeritus at the University of Edinburgh in Scotland. Her research interests are based on the effects of UV radiation on human health, especially immunological aspects.

How did you become interested in the effects of UV on immunosuppression?

I trained as a virologist in the 1970s and became interested in skin infections, including cold sores, caused by the herpes simplex virus (HSV). HSV remains latent in the body following the first infection but can be reactivated, resulting in the re-emergence of skin lesions. Exposure to the sun is a common trigger for the reactivation. I was intrigued by why and how this should happen; the experiments took me into what was then a new area, subsequently called photoimmunology, and converted me from a virologist into an immunologist in the process.

So how does UV radiation cause immunosuppression?

It is difficult to provide a simple answer to this question as several multistep pathways are possible, depending on factors such as the antigen (a molecule that stimulates an immune response when introduced into the body) in question and the quantity and spectrum of the UV radiation. In essence, there are several UV absorbing compounds in the skin that initiate the process. In particular, DNA forms cyclobutane pyrimidine dimers and urocanic acid, a compound present in the skin, undergoes a trans to cis double bond isomerisation. As a result of these structural changes, a wide range of immune mediators (molecules released by immune cells in response to invasion by the antigen) is produced. These have effects on several cell populations, inducing some to migrate from the skin to the draining lymph nodes. There they undergo an abnormal interaction with immune effector cells (cells that cause antigen breakdown), leading to the generation of regulatory cells that mediate suppression of the immune response. The time between the UV exposure and antigen administration needs to be less than a few days for the immunosuppression to occur and, once generated, the regulatory cells are life-long.

What are the implications of this for vaccinations and why is it such an important topic?

In several mouse models, UV irradiation before or after vaccination was demonstrated to suppress the animals’ ability to respond immunologically. In humans, there is evidence that exposure to UV radiation or the sun can suppress certain immune responses. Thus UV exposure may have the potential to lower the efficacy of human vaccination. It is important to find out whether this is the case or not as vaccination represents a major public health strategy throughout the world to control an increasing range of common infections, particularly in childhood.

It seems that this potentially serious issue has been overlooked. Why do you think this is?

It is true that very few attempts have been made to investigate this area. This could be due to ignorance regarding the potential of sun exposure to suppress immunity or due to the multidisciplinary nature, protracted time and expense of such research. Additionally, it is obviously not ethical to artificially irradiate individuals, especially children, before vaccination or to infect them with live microorganisms to test the efficacy of vaccination. This means that an epidemiological approach may provide the most information, for example to assess the vaccine-specific immune responses in people vaccinated in the winter months compared with the summer months.

Your research isn’t all doom and gloom for sun lovers as you have previously published on the benefits of UV radiation due to its role in vitamin D formation. What do you feel is the best way to strike a balance?

Most of the vitamin D in the majority of people is produced by exposure to the UV radiation in sunlight. As vitamin D has many health benefits, it is important to ensure sufficient sun exposure but without increasing the risk of developing skin cancer. A simple message that fits everyone under all circumstances is not possible as there are many variables including skin colour, body fat and age as well as latitude of residence, weather conditions, season of the year and time of day. Various models have been developed in an attempt to provide some guidance and recently, measurements of vitamin D levels following real sun exposure have been published. These indicate that casual midday summer sun exposure should be enough to provide an adequate vitamin D level in most individuals who have their face and arms uncovered. Sunburn should be avoided as it is considered the major environmental risk factor for all forms of skin cancer. Protective measures should be taken when in areas of high sun intensity, such as by seeking shade, covering up and using sunscreens.

What scientific achievement are you most proud of?

I am most proud of the collaborations I started to investigate the role of urocanic acid in immunosuppression. In addition, I demonstrated that UV radiation could downregulate immune responses in HSV infections, the first time that UV had been shown to affect microbial immunity.

If you weren’t a scientist what would you be?

Possibly I might have become a professional golfer, although when I was a student, there was no professional circuit for women.