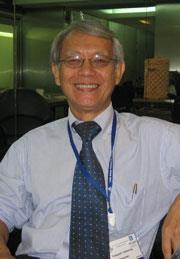 What challenges did you face as the minister of science and technology?

Helping the general public to appreciate science and maybe understand some of it. The public need to appreciate the advances that make society better, whether it is a new drug or a new IT development. That is the problem in Thailand - people want the products, but they don’t want to support the processes.

What does the future hold for science in Thailand?

How can government help to boost science?

Government can help a lot. Unfortunately, R&D funding has to compete with the other pressing needs of the country. But, over the past two years, the message has got through and the previous prime minister understood that there is a need for R&D funding. The new government also understands that. This has not trickled down to the budget people yet, but we will see.

During my studies at the University of Oxford, UK, I was investigating the chemical kinetics of enzymatic reactions. When I went back to Thailand, I realised that no one understood, or cared, about enzymes. To make people understand that studying enzymes is important, I decided to tackle a significant problem in the country using my expertise.  I studied red blood cell membranes and saw that malaria was a significant problem, and that both chemistry and biochemistry could be used to understand the parasite’s life and processes. The available drugs - such as chloroquine and pyrimethamine - were becoming ineffective so we needed new drugs. Together with other biochemists, I formed a malaria research group. We were lucky that we were mostly in the same department so we could meet on a daily basis, because it was very difficult to do research in Thailand.

Is the cure for malaria drug-based or vaccine-based?

It is still drug based. Some vaccines are being developed by GlaxoSmithKline, but they are not as effective. I think that there is still a long way to go on the vaccination side. The ideal drugs have to be cheap, orally administered and preferably cause no resistance, which is almost impossible. You will find that almost all anti-infection drugs, including antibiotics, will last at most 5-10 years before resistance is developed. I think that we need a new paradigm where the drug hits a more fundamental mechanism so that no mutation or resistance is possible.

What have you discovered?

We found the structure of the enzyme (Plasmodium falciparum) dihydrofolate reductase-thymidylate synthase [a target for antimalarials] (published in Nature Structural Biology in 2003). From there, we understood the basis of resistance owing to mutation in the active site so that we could design compounds that would avert the effect of mutation. Now we have many candidates, but we have not published the details yet. One in particular is P218, which is a flexible diamino pyrimidine with good efficacy. P218 is effective orally and does not cause much resistance (although this part needs to be investigated), and it is relatively cheap to manufacture.

How can developed countries help developing countries to eradicate the disease?

Thailand is good in certain areas of research but poor in others. For example, in malaria research, we are very strong in the clinical sciences. International researchers come from outside Thailand to study the disease clinically. Thailand is a good base for them to go to neighbouring countries where the disease is still prevalent. We also have very good basic early applied research, such as fundamental research in the discovery and development of new drugs. But, we severely lack scale-up capabilities, and an understanding of toxicology, pharmacokinetics and pharmacodynamics. We don’t have the facilities to study the preclinical phase and mutational studies.

So, we have to collaborate with external groups, for example that of Livia Vivas at the London School of Hygiene and Tropical Medicine, UK. We have an ongoing collaboration with the Medicines for Malaria Venture, based in Switzerland, to help us validate the structure of the target and support us in developing good drug candidates based on those targets.

However, we can do some things on our own and lead our own researchers. I think that this is really important for scientists from developing countries. Most scientists in developing countries have participated in international research projects but until now, they have played very small parts, doing some screening or cell culture work. Very few rise to the level of planning and executing and developing that strategic thinking to lead a project. We do need that.

Is it difficult to find funding in Thailand?

We have to go out and tell people that our work is really important to get support. I decided to approach people who have important positions in national research councils and universities to persuade them that we do need a new kind of granting organisation. I found some very good people who listened to us and we founded the BIOTEC research centre and later on the National Science and Technology Development Agency. These are agencies that give grants as well as do their own research. Also, I helped to draft a law that started the Thailand Research Fund, which gives grants to researchers of ?30,000-50,000. This would go a long way in Thailand.

What achievement are you most proud of?

Making society understand the importance of science. At least now, there are basic structures to support scientists to enable them to do original research and not just buy technology. This is very important for the future of countries like Thailand.

Equally, I feel proud that I am still a working scientist. This is very important because it makes me understand why we need support. I was dragged into politics for a few years, but I came back to my research and that is not very easy.