Invisible ink for the 21st century

Scientists from China have developed a new lithographic printing technique to layer a pattern onto photonic paper. The development could be significant for anti-counterfeit applications, such as hidden writing for anti-theft labels, because the pattern created is effectively invisible until the material is immersed in water.

Now, Jianping Ge and Ruyang Xuan  from Tonwgji University, Shanghai, have overcome this problem. They printed a pattern under a photomask (an opaque plate with holes that allow light to shine through in a defined pattern) onto photonic paper made of iron oxide nanoparticles that were encapsulated inside silica colloids, which were in turn incorporated into a polymer mixture. Then, they crosslinked the polymer nanocomposite paper by immersing it in sodium hydroxide to form a silica network, before removing the mask. This leaves a crosslinked background and an un-crosslinked pattern and minimises the optical difference between the background and the pattern, making the pattern effectively invisible. 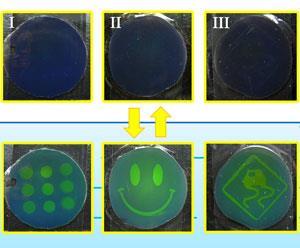 When the team exposed the paper to water, the background and the pattern swelled at different speeds, creating a difference in the reflection wavelength between the two layers, causing the pattern to become apparent within 10 minutes. The advantage over other techniques, such as UV photopolymerisation and photolithography, is that once the paper dries, the pattern fades back to its original invisible state until the paper is immersed in water again.

’A key factor of any ink or material for security applications is often the ease of the readout method,’ says Robert Stokes, an expert in optical lithography with the University of Strathclyde, UK. ’Ge and Xuan’s work is significant in that a simple method generates high contrast at visible wavelengths.’

Ge is looking forward to seeing the work find its home not just in anti-counterfeiting processes but also in other applications such as dynamic signs, and optical sensors and coatings.